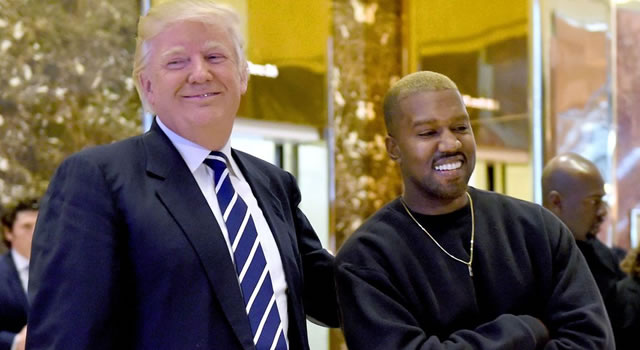 Rap megastar, Kanye West has said he would be delaying his presidential ambition till 2024 in deference to President Donald Trump’s 2020 reelection.

West, who is a huge supporter of Trump, stated this at the White House on Thursday where he had gone for a meeting with the president on prison reforms.

West was reacting to President Trump’s statement that he, West would be a good future presidential material. But West responded saying he would not want to get in the way of Republican 2020 reelection.

The supposed meeting on prison reform however turned out to be more of an opportunity for Kanye West to show how much he loves and support the president.

“I love this guy right here,” the serial Grammy-winning artist declared in the Oval Office, after hugging Trump.

Talking loudly and rapidly on everything from Trump’s protectionist trade polices to replacing Air Force One with a hydrogen plane, black gun crime, being married to Kim Kardashian and “infinite amounts of universe,” West left the normally loquacious president nearly speechless.

“That was quite something,” Trump finally said to laughter from astonished senior aides and journalists at the end of the soliloquy, which West punctuated with bangs of his fist on the legendary Resolute desk, used by presidents since the 1880s.

“It was from the soul. I just channeled it,” the musician said, adding — to further gasps — that Trump “might not have expected to have a crazy motherfucker like Kanye West supporting him.”

President Trump in a Fox television interview Thursday after the meeting, said West’s support had transformed blacks’ view of his presidency.

“When Kanye came out a couple months ago, something happened,” Trump said.

“Nobody (has) ever seen it. He has a big following in the African-American community, a big, big following…. The polls went through the roof.”