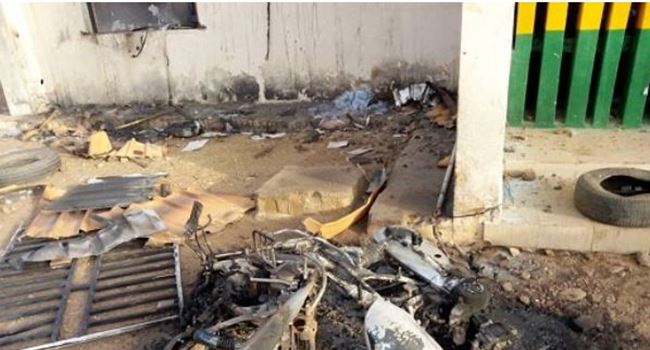 Scores of angry youths in Kusada town in Katsina State set fire to a police station after the officers attached to the station stopped them from observing Jumat prayers on Friday, March 27.

Reports say the police officers were acting on the directive of the state government which announced a ban on social gatherings including religious gatherings on March 25 to prevent the spread of COVID-19 in the state.

According to reports, the angry youths who were stopped from observing Jumat prayers stormed the police station thereafter, over overpowered the police officers and destroyed every property in sight.

Reacting to the incident in a statement on Saturday, the spokesperson of the state police command, SP Gambo Isah, said 90 suspects have been arrested in connection with the attack.

“Recall that Katsina state Government under the leadership of His Excellency, the Executive Governor of Katsina state, Rt. Hon. Aminu Bello Masari, CFR, fnim, issued a restriction orders Nos. SEC.2/T/3 and SEC.2/T/14 dated 25th and 27th March, 2020 respectively, directing for the total closure of its borders and suspension of large gatherings for the weekly Friday prayers and Sunday Church services while marriage ceremonies to be conducted in a low key across the state as part of measures taken to curtail the spread of the Corona virus pandemic.

“However, yesterday 27/03/2020 some disgruntled youths under the leadership of one Mallam Hassan tested the will of the state and conducted a Friday prayer in one of the Kusada jummaat mosques. Subsequently, he was arrested for questioning at Area Commander’s office, Malumfashi which did not go down well with some of his followers.

“Consequently, today 28/03/2020 at about 09:00hrs, this particular group organized themselves in such a tumultuous manner, rioting, attacked and over powered the policemen on duty at Kusada Division, set ablaze the police station and DPO’s Quarters. They also burnt down seven motor vehicles and ten motorcycles in custody of the police station,” Isah added.