Kemi Olunloyo mends fence with Pastor Ibiyeomie, claims he led her to God 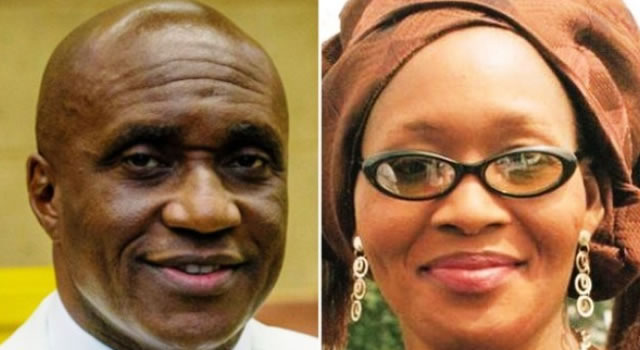 Media personality Kemi Olunloyo has finally settled her rift with Pastor David Ibiyeomie, the founder and General Overseer of Salvation Ministry who took her to court and subsequently got her jailed for defamation.

Kemi revealed that much in a post on Instagram saying the clergyman officially helped her surrender her life to Jesus Christ after she had an encounter with him when she walked into a branch of his church.

Her post on Instagram reads; Pastor @david_ibiyeomie officially helps me SURRENDER MY LIFE TO #JESUS, “Yesterday Tuesday 16th of January 2018 marked 7 days I left #Portharcourt prison. I have been doing outdoor therapy as instructed by my psychotherapist by venturing out safely into neighbourhoods which I’ve been doing as part of my treatment of depression.

“I normally go to 3pm prayers at the Catholic Church down the street to get spiritual energy. Last night, I decided to go to New GRA to worship at #Salvationministries. I walked into the kingdom of God like no other. This church was very different. I was lifted! They were having 4.30pm prayers after a 21 day fast. I joined them in an energized service in a God anointed mega church. I ate communion and drank wine. The Lord was everywhere!

“After service I asked security personnel to meet Pastor Ibiyeomie privately in his office to pray for me. The men in black suits took me to a waiting room and then asked me to come in. There were 5 pastors in the room watching. Two were my prosecuting lawyers, and then I walked up to him telling him I was the one he locked up in prison! I knelt down and he grabbed my hands.

“Suddenly my all day asthma wheezing and migraine vanished! He had divine powers of some kind. He prayed for me, told me he had FORGIVEN ME long time ago and repeated it in front of me again. I told him I was not bitter and have forgiven him too. I have decided to serve God and it will be through Salvation Ministries and him.”

Kemi was re-arrested a couple of months back for failing to fulfil bail conditions after initially spending 81 days behind bars following her arrest at her home in Ibadan in March last year.

This was sequel to a petition written to the Nigerian Police Force by Pastor Ibiyeomie who claimed she defamed him by publishing an adultery story about him which he said was unfounded.

She was freed from the Port Harcourt maximum prison last Wednesday for the third time in the last 12 months after spending 90 days in detention for the case of defamation levelled against her by Pastor Ibiyeomie.

Tonto Dikeh dares estranged hubby, says her reality show will go on despite his lawsuit (Video)

Yoruba ladies are the ultimate wives