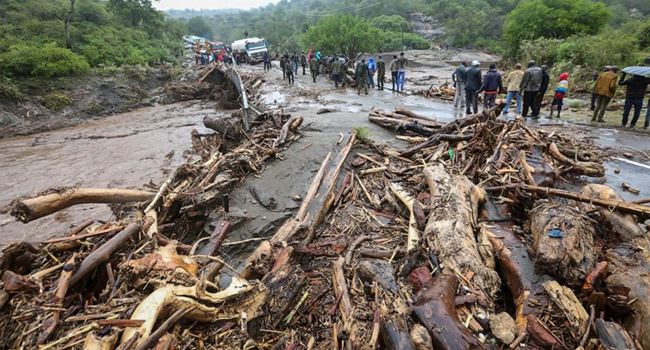 Rescue operatives in Kenya late on Friday found the lifeless bodies of five of 12 police officers attached to the Anti-Stock Theft Unit who were swept away by raging flash floods Thursday night.

Reports say the victims were among 12 officers travelling in a vehicle in the town of Chamoe, in Baringo County, when they were swept away by flash floods in eastern Kenya.

Five policemen survived the ordeal and were taken to Kabarnet hospital for treatment while two others are still missing.

READ ALSO: I am confident COVID-19 originated from a Chinese lab —Trump

They had spent Thursday at Kabarnet in a security briefing and were heading back to their camp at Chemoe on the border of Baringo North and Tiaty sub-counties when tragedy struck.

They were unlucky to be caught up in the dangerous area sandwiched between hills, from which poured the deadly flash floods in the thick darkness.

The wreckage of the police truck that was extensively damaged was found 200 metres downstream, a gory representation of what the officers went through.

Simon announces arrival of second baby. See what he wrote about his wife