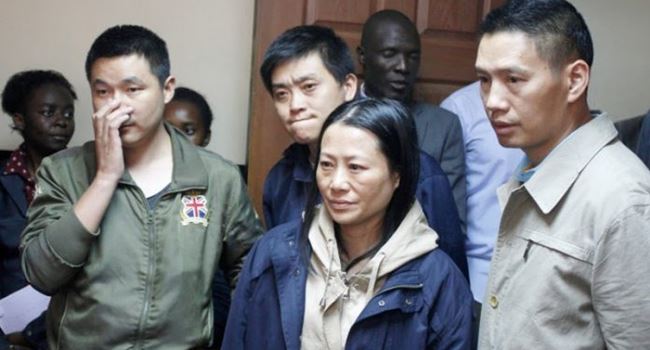 The deportation of four Chinese nationals detained after a circulated video footage purportedly showing one of them caning a worker has been suspended by a court in Kenya.

Last week, Interior Minister Fred Matiang’i’ signed the deportation order after a court had allowed police to detain the four individuals for another 15 days. No court charges had been made.

The four Chinese national were arrested on 9 February after detectives raided Chez Wou Restaurant in the Kileleshwa suburb of the capital, Nairobi, after it was alleged that one of them hit a Kenyan worker with a cane for tardiness.

Kenyan police had earlier tweeted days after the incident that the four Chinese nationals were working in a restaurant in the capital, Nairobi, but only one of them had a work permit.

The police had tweeted that they had raided Chez Wou Restaurant in the suburb of Kileleshwa in the capital, Nairobi, where the four were working.

They said that only one of the Chinese nationals had a work permit.

“Eight Kenyans who work at the hotel were also escorted to Kilimani Police Station for further interrogation,” the police said.

The Chinese embassy in Kenya also tweeted that it was aware of the video and that it “supports” investigations by Kenyan authorities.

“The Embassy noticed a video clip about a Chinese chef and Kenyan colleague issued by K24 TV today. We support the Kenyan police to investigate the whole issue thoroughly according to Kenyan laws. Whoever violating the law will face the legal consequences,” the Chinese embassy noted in the tweet.