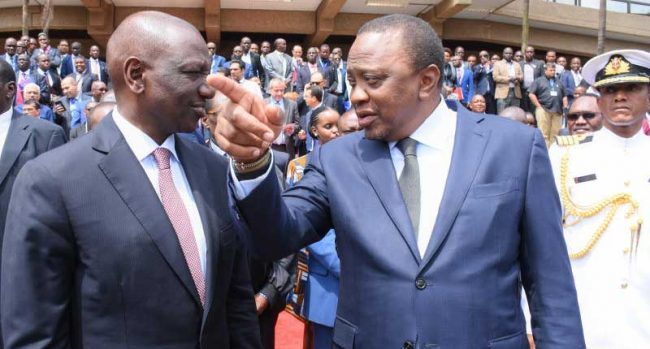 There is an unhealthy divide growing between President Uhuru Kenyatta and Deputy President William Ruto over a corruption scandal that rocked the National Treasury, reports say.

Trouble started between the pair when Secretary to the National Treasury, Henry Rotich (an ally of Ruto) was arrested in July 22, and later accused of corruption.

Ruto’s allies say they are being unfairly targeted in the anti-corruption drive by Kenyatta, pointing also to the July 28 arrest of Kiambu County Governor Ferdinand Waititu.

Senator Aaron Cheruiyot, a vocal Ruto supporter said the criminal charges against Rotich confirmed what Ruto has been saying all along: “The government did not lose 21 billion [Kenyan shillings]. The issue is whether proper procurement procedures were followed.

“The Ruto base is concerned by what they justifiably see as a biased war on corruption. If you apply logic to almost all the high-profile cases you notice a systemic plot at elimination from high office and nothing to do with corruption,” Cheruiyot added.

Huawei ban may be lifted after extension of reprieve