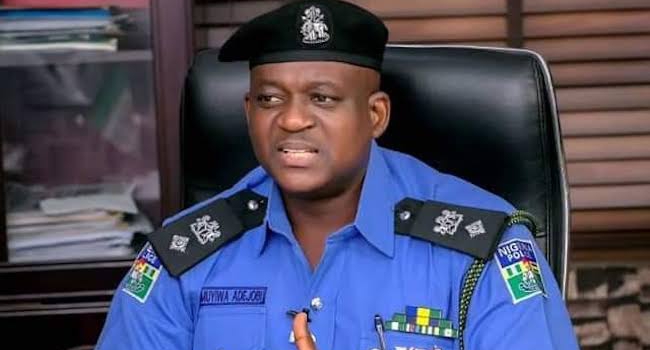 The Public Relations Officer for the Nigeria Police Force, CSP Olumuyiwa Adejobi, has described the policeman who killed a pregnant Lagos woman, Drambi Vandi, as a nice man.

Bolanle Raheem was shot dead by Vandi, an officer attached to Ajiwe Police Command in Ajah, Lagos, while returning home with her family members on Christmas Day.

The unfortunate development had generated public outrage with many Nigerians calling for the urgent reform of the force.
SEE VIDEO:

Vandi, who was said to have spent 33 years in the police force, had since been remanded pending the hearing of the case.

Adejobi, who spoke recently in an interview with Splash FM in Abeokuta, the Ogun State capital, however described the killer officer as a “good and very nice man”.

The police spokesman insisted the killer-cop must have been under a spiritual spell to have shot the deceased.

He said: “One thing people should understand, we are in Yoruba land here now. I’m sure many elders will know what they call ‘efun, edi, arosin, asasi’ (some magical spells cast on people to make them misbehave).

“Whatever that happens in the physical realm is controlled by the spiritual realm. The man was never a drunk, in fact, I was told he is a very nice man. I know him. The guy has been a very good man. Forget the story that he was this or that while in Niger. He was never in Niger State command.

“He is a very nice man. I think he is from Plateau State. So, what could have warranted him to cork a rifle and shoot directly at the woman? As a man, when you wake up in the morning, pray don’t let me misbehave today, don’t let me do this today.

“If something wants to happen, we won’t know the person they have sweared (sic) for. Maybe it’s the woman or the husband or the police (Vandi). Something is wrong somewhere because it’s not common for ASP to fire. It has always been the rank and file, Inspector, Sergeant, Corporal, they are the ones you will always see.

“The first case, before this one, it was an inspector. The ASP in many cases won’t come down. You will see that they always sit in the car, you will go and meet them and say ‘oga, them don do this, he will be the one they even settle’.

“In a very long time, in history and I have spent two decades on this job, it is very rare to see an ASP who has put in 33 years to be the one to pull the trigger. However, he is going to carry his cross.”