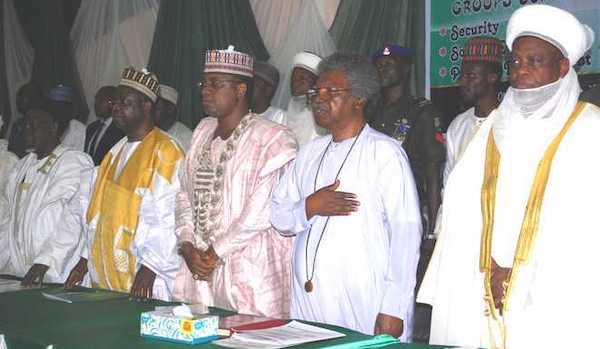 The Northern Elders’ Council (NEC) declared on Wednesday that individuals behind the recent killing of 43 farmers in Zabarmari community of Borno State must not go unpunished.

Therefore, the elders urged the international community to support Nigeria in the fight against insurgency.

In a statement signed by NEC’s Assistant Secretary-General, Dr. Adamu Kabiru, the group decried the mindless murder of innocent Nigerians and called for immediate action against the perpetrators of the heinous act.

While expressing solidarity with President Muhammadu Buhari and families of the victims of the massacre, the group urged the international community to support Nigeria by cutting off the terrorists’ access to funding and arms

“The Northern Elders’ Council (NEC) is imploring the Federal Government to ensure that the Boko Haram terrorists responsible for the killing of scores of farmers in Zabarmari, Borno State, must not go unpunished for their abhorrent crime against humanity.

“The specific individuals that carried out the attack should be identified and dealt with while the campaign to exterminate the terrorist group should be escalated. This is even as we sympathize with the families of the bereaved, President Muhammadu Buhari, and the entire nation.

“We condemn the killing of these innocent farmers who were only out to earn their livelihood, in the strongest terms as barbaric, repulsive, inexcusable, depraved and deserving of the harshest consequences possible.

“The punishment for this crime should be made particularly stiff given the fact that the terrorists possibly targeted the farmers in order to precipitate a food crisis in the country.

READ ALSO: Northern Elders Forum says if Buhari were honourable he would resign over Borno attack

“The killing of the farmers should now prompt an alignment among all stakeholders irrespective of pecuniary differences. Those sitting on the fence in the anti-terror war must now take a stand in the interest of humanity while those who usually make justification for the crimes committed by Boko Haram terrorists should now know that it is them against the civilized world that hold the sanctity of human life dear.

“NEC is certain that the death of these farmers will trigger actions that guarantee that the days of the terrorists are numbered, and this singular wicked and dastardly act is one they will pay the highest price possible for.

“Nigerians should help ensure this by furnishing the military and security agencies with timely information that will lead to successful military operations against Boko Haram fighters.

“We, therefore, urge Mr. President to give the command for the Nigerian military to unleash its arsenal on Boko Haram and any of its known affiliates while the intelligence community is also mandated to fish out terrorists’ enablers with a view to cutting off the financial, propaganda, and intelligence they receive from their supporters.

“Resources should be prioritized to scale up the operations to rid the northeast of Nigeria and the entire Lake Chad Basin of terrorism.

“The international community must, at this point, shake off their indifference, particularly countries whose foreign policy drive had contributed to the rise of extremism and terrorism.

“They should support Nigeria by assisting in cutting off the terrorists’ access to funding and arms. Those countries that have refused to sell arms to Nigeria must, at this stage, have a rethink especially when it has become crystal clear that their subtle embargoes on arms sales to Nigeria were premised on false reporting by NGOs that covertly work to advance the cause of the terrorists.”