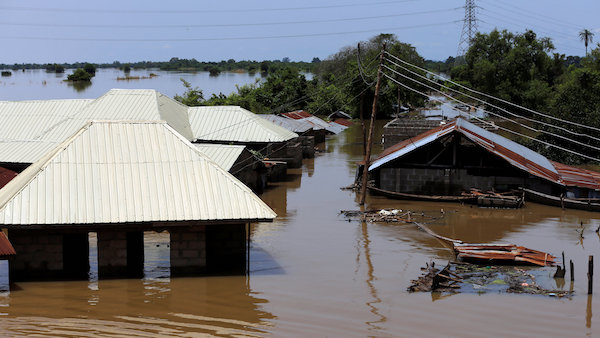 Kogi State government on Saturday, lamented over ravaging floods in the state, which it said, had taken over 150 communities.

Mr Sanusi Yahaya, Kogi Commissioner for Environment and Natural Resources, said over 150 communities have been submerged following a flood in nine Local Government Areas (LGAs) of the State.

Yahaya spoke with newsmen after a stakeholder meeting at the state emergency operation centre on Saturday in Lokoja.

According to the commissioner, the centre had been activated as the state was already experiencing flood emergency.

Yahaya, also the State Coordinator, Emergency Operation Centre (EOC), said that out of the nine local government areas located along the banks of River Niger and Benue, seven LGAs were severely affected while other two were not so severe.

He said the LGAs severely affected are: Ibaji, Kogi Koton Karfe, Lokoja, Ofu, Ajaokuta, Omala and Idah, saying over 90 per cent of Ibaji communities have been submerged.

”Particularly, the majority of communities at Ibaji are underwater, and many households have been affected and displaced.

”As we speak, the water level has risen very high to about 10.60m on Saturday in Lokoja from the report of the Nigerian Hydrological Services Agency (NIHSA).

”In the last few days, many communities, settlements have been displaced as a result of flooding,” he said.

He said that over 20 camps had been opened by the government to accommodate flood victims, which were spread across the nine affected LGAs.

Yahaya, however, advised residents of flood-prone areas and affected communities to relocate to safer places or move to the nearest camps opened by the state and local governments, to avoid loss of lives and property.

He said that with the activation of the state emergency centre, the state was collaborating with all the relevant stakeholders to ensure timely and appropriate responses.

“The state needs help; while we are working within the resources available to us, we need temporary shelter provision, food, non-food items and water, which the affected victims would need.

“In terms of efforts to document the displaced persons; the profiling is ongoing and we will keep updating the number of the affected households and persons.

”Our officers are in the field profiling, and we have to put it together before we can give out the figure, and this figure will keep changing day by day,” he said.

The commissioner said the number of households as at Saturday at Gadumo axis was 215, Ganaja 176, Galili axis 272, and Adankolo axis 246, under Lokoja and Ajaokuta LGAs.

He, however, noted that no human casualty has been recorded in terms of death, but stressed that the victims were facing the precarious situation.

The commissioner urged the Federal Government through NEMA to come to the aid of the state while appealing to individuals, organisations and other relevant stakeholders to assist the state.

”We have the Flood Estate in Lokoja, which is directly under the control of Kogi SEMA, and it is already opened for habitation and those to occupy them have been profiled for camping.

”But we do not have enough camps that could accommodate all the affected people, so we are calling on the general public to assist and also be accommodating to victims.

”We have camps that we have equipped with toilets and borehole, especially with the support of the Red Cross; many of those camps have toilets and water supply through borehole.

”The state is equally doing her best to make sure that sanitation, water and hygiene are ensured.

”We are pleading for more emergency shelter like a tent to support the state’s efforts because what we have are not enough. We want the Federal Government, organisations and individuals to support us,” he said.