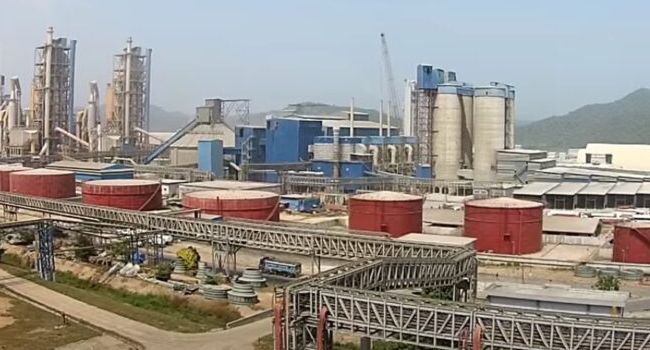 Kogi state government has commenced the process of recovering the cement plant in Obajana from Dangote Industries Limited.

The Dangote Cement plant in Obajana, Nigeria, is the largest cement production facility in Africa, producing up to 30,000 tons daily.

Should the Kogi government succeed, Dangote could watch his fortune plummet further from the already N155.59bn ($359m) already lost in 2022, according to data from Bloomberg billionaire index as at Friday, October 7.

Ripples Nigeria had earlier reported that the cement plant was sealed due to an “ownership tussle”.

Now the government has decided to take it up the notch by constituting a specialised technical committee to evaluate the legality of the alleged acquisition of Obajana Cement Company by Dangote Cement.

The committee on Thursday submitted its findings via Folashade Ayoade, secretary to the state government (SSG).

During the presentation, Ayoade alleged that the transfer of Obajana Cement Company to Dangote Industries Limited was “invalid, null and void”.

She disclosed that, in the report, three certificates of occupancy for Obajana Cement Company Plc, which was solely owned by the Kogi State government at the time, were used to obtain a loan of N63 billion by Dangote.

According to her, the committee, in view of its findings, has recommended that Kogi State take steps to recover Obajana Cement Company from Dangote Group.

The committee, chaired by the SSG, also recommended that: “Kogi State government should take steps to recover all accrued dividends from profits made over the years, including accrued interest on same.

“Kogi State government should take steps to cancel the existing seven certificates of occupancy in the name of Dangote Cement Company.

“There is no evidence of consideration paid by Dangote Industries Limited to Kogi state government from the alleged transfer of Obajana Cement Company Plc and no dividend was paid to the state from the profits realised from the inception of Dangote Cement Company Plc to date.

“By the assignment of the three certificates of occupancy, the title in Obajana Cement Company Plc, still vests in Kogi state government as the sole owner.

“The three documents were used to obtain a loan of sixty-three billion naira only (63,000,000,000.00) to finance the construction of the cement plant in Obajana.”

In his remarks, Yahaya Bello, Kogi governor, said he had taken the bold step in line with his mandate to safeguard the lives and livelihood of the people of the state, including residents, and to ensure their wellbeing.

Bello said this was also coming on the heels of protests by the people of the state who felt they had been suppressed and marginalised by Dangote Group who had come to rip them off.

The governor, however, said the state was open to discussions once Dangote Group was ready to come clean.

“We received several petitions from the general public over this particular subject matter. In the past five to six years, all efforts to sit with the proprietors of the Dangote Conglomerate failed,” Bello said.

“We set up a committee to look into this and invited the Dangote company to discuss with them and tell them the imminent dangers they are exposing the people to, but it all fell on deaf ears.

“I am here to defend my people, and from all reports, it is clear that Obajana Cement Company does not belong to Dangote.”

Related Topics:DangotekogiObajana Cement factory
Up Next

US slams Nigeria, other OPEC+ members over decision to raise oil price