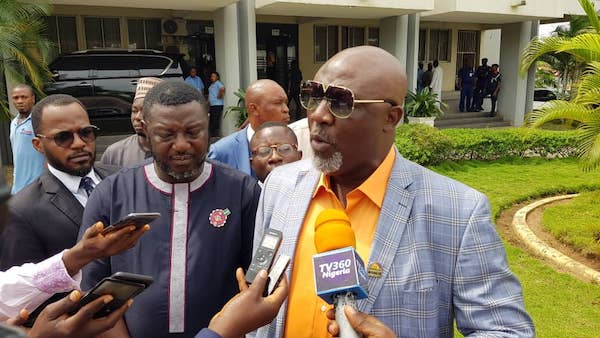 In a copy of the petition dated November 27, 2019, Melaye called for the inclusion of the omitted areas earlier highlighted in the exercise. The petition was received by Jafaru Leko on behalf of the INEC chairman.

INEC had scheduled a supplementary poll due to inconclusive rerun senatorial election, and a rerun of House of Representatives poll of Ajaokuta federal constituency, for Saturday.

Following the cancellation of the November 16 election, Melaye had claimed that the data released by INEC for the conduct of the supplementary election did not reflect the total number of units affected by what he called pervasive malpractices and irregularities.

READ ALSO: KOGI WEST RERUN: CAN, JNI pass vote of no confidence on police, others

Drama ensued as Senator Melaye attempted to make his way into the INEC office and was restricted by security.

The petition reads, “The re-run notice issued by INEC covering the entire seven local government areas in Kogi West Senatorial District as well as the details contained in this petition, further amplify the pervasiveness of malpractices and irregularities that marred the conduct of November 16, 2019 election.

“However, in order to partially remedy this fundamental flaw, I request for the inclusion of the omitted areas earlier highlighted in the supplementary poll.

“The most charitable conclusion is that INEC failed to exercise the requisite diligence before rolling out the details of the proposed supplementary election.”

Melaye added that all these infractions put together showed that INEC as a matter of urgency must postpone Saturday poll until all these anomalies are rectified.