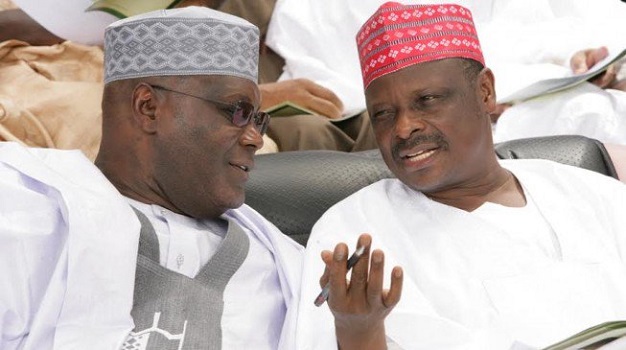 A chieftain of the All Progressives Congress (APC) and former Kano State governor, Senator Rabiu Musa Kwankwaso, was nowhere near the venue of his party’s national convention on Saturday.

The Kano politician, who came second after Buhari during the APC presidential primaries in 2015, ignored the party convention for a courtesy visit to former Vice President Atiku Abubakar at his residence in Asokoro, Abuja.

Kwankwaso, who was at Atiku’s home at about 8:30pm had a closed-door meeting of about 45 minutes with the former vice president, an opposition Peoples Democratic Party (PDP) member and presidential aspirant for the forthcoming 2019 general elections.

While details of their meeting were not readily available, it was however learnt that the two politicians, who contested the APC presidential ticket with Buhari in 2015, deliberated on happenings in the country.

The Media aide to Atiku, Mr. Paul Ibe, who confirmed the meeting to newsmen, did not give information about the meeting.

No reason has been given as to why Kwankwaso, who has been having a running battle with his successor, Governor Abdullahi Ganduje in Kano State did not attend his party’s convention at the Eagles Square, Abuja.

Although Kwankwaso is yet to dump the APC like his host has done since December 2017, there are speculations however that the senator may also leave the ruling party soon.