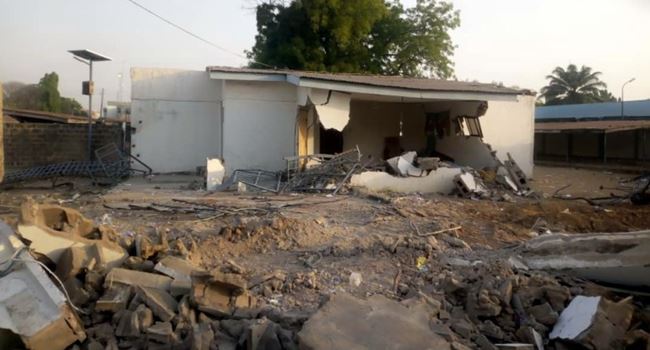 The Kwara State government on Thursday, demolished property on a piece of land owned by former Senate President Bukola Saraki which was recently seized by the state government.

The property, popularly known as “ile arugbo” was reportedly demolished in the early hours of the morning, by the state’s task force, in company of armed policemen.

It was learnt that about 50 policemen as early as 3:00 am had gone to ensure the demolition of the building but were resisted by some old women.

The security men it was further gathered, later came back at about 4:00 am, and ensured, that, ile arugbo, which simply means old people’s home, was pulled down.

During the days Saraki’s family held sway in the leadership of the state, the property was used for political gatherings.

The development followed a recent court ruling that the property should be permanently forfeited to the Kwara State government over claims that it was acquired illegally.

The state governor, AbdulRahman AbdulRazaq recently declared he was going to destroy the late Olusola Saraki’s property on the land, and that a secretariat and parking lot of the civil service clinic, which according to him, the land was firstly designated for, would be constructed on it.

Saraki had kicked and warned the governor against destroying the property. He had contended that his late father legally acquired the land from the state government.

Amid Saraki’s protests, the AbdulRazaq-led government of Kwara State made good its threat and had the property demolished on Thursday morning.