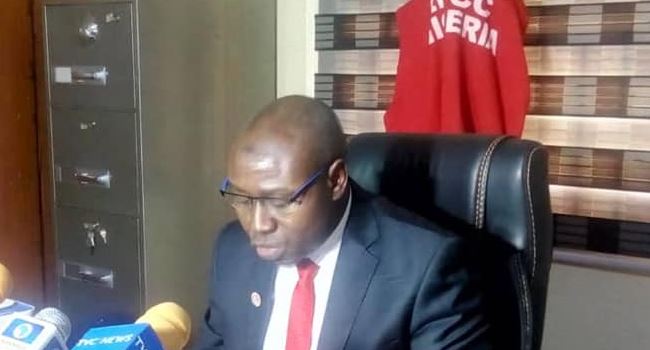 Operatives of the Economic and Financial Crime Commission (EFCC) on Tuesday revealed that officials of the Kwara state government whose monthly earnings are not more than N90,000 now owned filling stations, hotels and residence after swindling the state fund.

The commission said 15 properties within Ilorin metropolis are currently under the investigation of the commission.

The Head of the Ilorin Zonal Office of the commission, Mr Isyaku Sharu, disclosed this on Tuesday, while speaking with journalists in Ilorin.

Sharu also maintained that the commission saved the Kwara State Government N10 billion that would have been lost to politicians and civil servants before the May 29, 2019, handover to a new administration in the state.

The anti-graft agency said it had commenced investigation of the individuals involved in the attempted fraud.

Sharu said the anti-graft agency mounted surveillance on the state government’s accounts few days to the handover and was able to save the state about N10bn, which it got from the Federal Government, from being misappropriated by government officials.

He stated, “It has always been a tradition in the country that whenever any government is exiting, it will indulge in massive pilferage as a last-minute golden opportunity, hence our resolve to mount a surveillance on all Kwara State Government accounts between May 24 and 29, 2019 when the state received money from the Federation Account Allocation Committee, Joint Account Allocation Committee, Value Added Tax and tax refunds from the Federal Government to the tune of about N10bn.

“I can authoritatively tell you that we saved the state a last-minute attempted financial misappropriation of those billions.”

Sharu also said that many former and serving officials of the state government, including civil servants, were being investigated by the commission, adding, “Officials, who ordinarily are supposed to guard and protect state resources have turned out to misappropriate them.

“To this end, the commission beamed its searchlight on the Kwara State officials and based on a credible tip-off, the commission is currently investigating over 15 properties in choice areas within the Ilorin metropolis ranging from hotels, filling stations to residential accommodation.

“It will shock you to hear that the alleged owners are civil servants, whose earninngs per month are not more than N90,000.”

The zonal head also said that the commission had gone after Internet fraudsters, whose ages range from 18 to 25 years, and had charged over 29 to court, including an herbalist, Jamiu Isiaka, who allegedly impersonated the Group Managing Director of the Nigerian National Petroleum Corporation and the Senior Special Assistant to the President on Media to defraud a Korean of N30m.

Sharu said the commission had secured 15 convictions with the court ordering the forfeiture of exotic cars and money running into millions of naira in the bank accounts of the fraudsters to the Federal Government.

He added that the EFCC had returned over N50m to the victims of fraud and “these include those recoveries from some state legislators, who allegedly duped some people.”