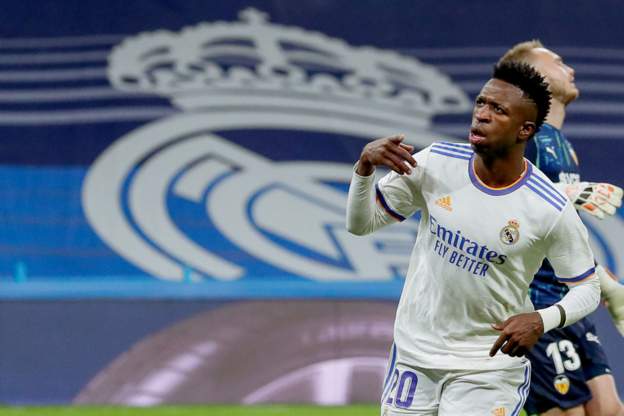 La Liga leaders Real Madrid bounced back from their stunning defeat against Getafe duting the week to pick a big win over Valencia on Saturday night.

The game played at the Bernabeu saw the hosts clinch a 4-1 victory to extend their lead at the top of the Spanish topflight.

A brace by Karim Benzema and a brace by Vinicius Junior led to the home win while Goncalo Guedes headed in a saved penalty for the visitors.

Benzema now has 301 goals for Real and trails only Cristiano Ronaldo, Raul and Alfredo Di Stéfano in the club’s all-time list of top scorers.

The win means Real hold an eight-point lead at the top of La Liga from Sevilla, who have two games in hand and face Getafe on Sunday.

Earlier in the Spanish League at the weekend, Barcelona were held to a 1-1 draw following a late equaliser by Granada.

Dani Alves made a return to La Liga and claimed an assist that led to Barca’s goal via Luuk de Jong, who opened the scoring in the second half.

The visitors thought they were heading to victory when Gavi was sent off for a second bookable offence, and the hosts used their numerical advantage.

Antonio Puertas then found the top corner in the 89th minute to salvage a point for Granada, who equalled a club-record seven La Liga games without defeat.

AFCON: Teams affected by Covid will play even with only 11 uninfected players

SportsBusiness: Why CAF has resolved to raise AFCON prize money by $1.85million