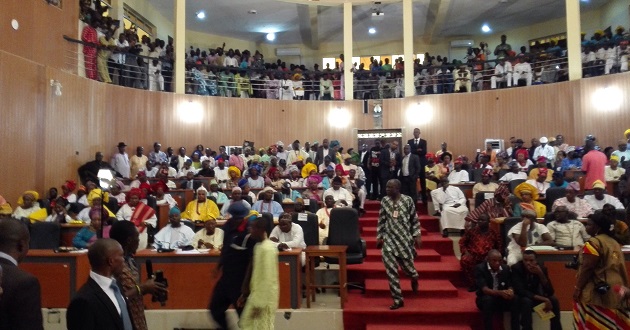 The Ekiti State House of Assembly Service Commission on Tuesday dismissed 21 staff of the Assembly over irregular appointment and absenteeism among others.

The commission’s Chairman, Taiwo Olatunbosun, who disclosed this in a statement in Ado-Ekiti, said the staff were dismissed after the commission’s management reviewed the report of a staff audit undertaken last year in a bid to reorganize the Assembly for effective service delivery.

He said: “The audit which discovered some irregularities ranging from hiding, alteration and mutilation of files, advancement of staff without due process, appointees illegally retained in the system after expiration of tenure, arbitrary transfer of service without cognate experience, overage staff members, irregular appointments/promotion of staff without approval, cases of forgeries and arbitrary placement of officers with utter disregard to scheme of service among others.

“The outcome of the report has since been discussed with the management staff of the Commission and the leadership of the state chapter of the Parliamentary Staff Association of Nigeria (PASAN).

“The commission wishes to stress that the routine staff audit was carried out in good faith without any intention of vendetta, witch-hunt or victimization against anyone.

“It is equally important to note that the exercise will assist the commission to restructure, reposition and bridge the generational gap in the establishment.”

The dismissed staff later staged a protest at the State House of Assembly over their “unjust dismissal” from the service.

The protest was led by labour leaders in the state.

The Secretary of the Ekiti State Joint Negotiating Council, Com. Gbenga Olowoyo, who spoke on behalf of the dismissed staff, said: “We are here to express our rejection of the summary dismissal of these 21 staff of the House of Assembly. Though the Commission denied ever sacking anyone, which was not true.

“We learnt from good authority that they have forwarded their names to the Accountant General to stop their salaries while also denied access to the Assembly complex despite being employed and put on the payroll for 10 years.”