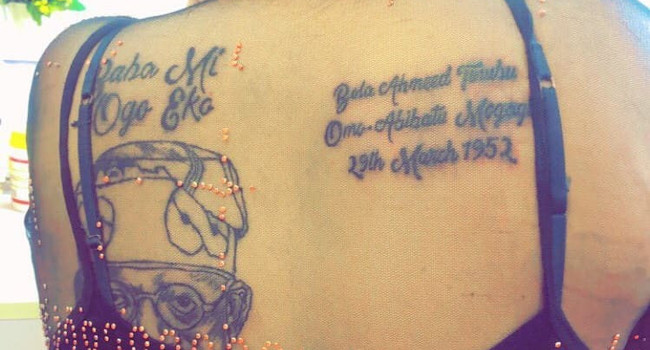 A social media user has flaunted her recently acquired tattoos. Interestingly, she designed the face of former Lagos state governor, Asiwaju Ahmed Tinubu on her back.

The Nigerian lady who is apparently a diehard fan of former Lagos state governor also tattooed his name and date of birth on her back.

This is coming amidst the burgeoning list of Nigerians who are acquiring tattoos as a form of respect and tribute to their role models.

Recall the trend kicked off several weeks ago, when Bobrisky rewarded a fan with the sum of N1 million and an iPhone for inking his face on her body.

Joining the list is this young lady who reveals that she is fascinated by the works and leadership of the former Lagos state governor.

A photo of her showing off the tattoo has since gone viral.

Check out the photos below:

Why ex-YBNL artiste, Temmie Ovwasa, regrets being a star