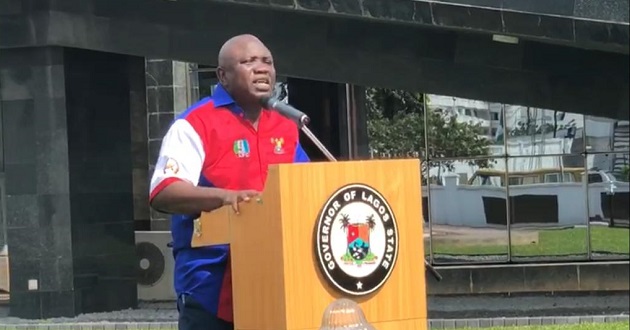 Lagos State Governor Akinwunmi Ambode has made ugly revelation about his opponent Babajide Sanwo-Olu in the Lagos State chapter of the All Progressives Congress (APC) governorship primary election.

Sanwo-Olu, said to have been anointed by the national leader of APC, Bola Tinubu, to fly the party’s ticket in 2019 general election, according to Ambode is not fit to lead as he was allegedly arrested for spending fake dollars in a nightclub in America.

Embattled Governor Ambode made the revelation when he addressed newsmen in Alausa, Ikeja, on Sunday.

Giving further reasons why his opponent was not qualified to be voted for as the governorship candidate of the APC, Ambode alleged that he had at one time, gone for rehabilitation at the Gbagada General Hospital, Lagos.

He said, “We have never responded to the campaign of calumny on social media. We have one family in APC. The aspirant being put up to compete against us is not a fit and proper person to take this job.

“I have done everything in the last three and half years to serve people selflessly and to serve the poor.

“This particular aspirant is somebody that has been arrested for spending fake dollars in a nightclub in America, and he has been detained for months.

“He doesn’t have the competence to do what he is being propelled to do. This is somebody that has gone for rehabilitation before. The records are there at the Gbagada General Hospital. We don’t want to go too far. Our leadership should have a rethink.

“I plead with our leaders to have a rethink, It is not about me, it is about the opportunity that APC has.”

This is coming on the heels of alleged pressure from Tinubu and some other leaders of the party on Ambode to resign his position or be impeached.

Earlier on Saturday, about 36 out the 40 members of the state House of Assembly reportedly pledged their support for Sanwo-Olu.

The primary election which was supposed to hold today (Sunday) was postponed till Monday.

Meanwhile, the Ambode Mandate Support Group has sent a petition to the APC National Chairman, Mr Adams Oshiomhole, over the endorsement of Sanwo-Olu in the forthcoming governorship primary by the party leadership in the state.

The Chairman of the group, Mr Akeem Sulaimon, made this known at a rally on Sunday in Lagos to mobilise support for the second term bid of Ambode.

Sulaimon said the action of the state Chairman, Alhaji Tunde Balogun, and members of the Governorship Advisory Council endorsing an aspirant as a candidate of the party was a violation of the party’s constitution.