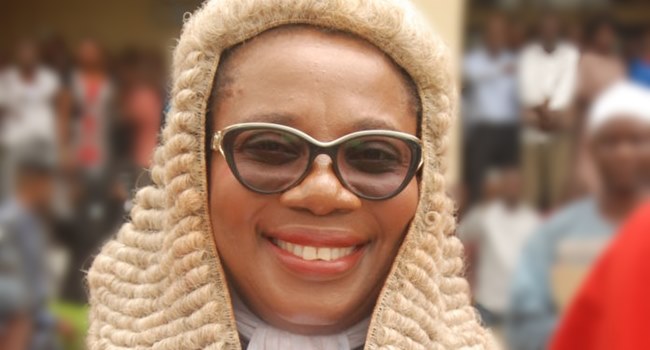 She also noted that the judiciary is also faced with challenges ranging from ineffective or incomplete investigations, congested court dockets, the awaiting trial syndrome and the attendant congestion of the prisons.

The CJ said there would be a speedy resolution of criminal cases to ensure an effective justice system.

She, however, launched two new practice directions for the Administration of Criminal Justice Law and the Restorative Justice system to ensure that petty offenders will no longer be sentenced to prison terms in the state.

She maintained that the practice directions, which take effect from June 3, would ensure that petty offenders would no longer end up in jail as long as they were prepared to take responsibility for their actions.

She said, “Criminal justice administration in the country has been beset by a myriad of challenges ranging from ineffective or incomplete investigations, delay in criminal trials, congested court dockets, the awaiting trial syndrome and the attendant congestion of our prisons, to name a few.

“Today in Nigeria we have seen countless cases where defendants are arrested for minor offences such as burglary and wandering; they are locked up in our prisons for the flimsiest reasons to join the teeming population awaiting trial inmates.

In fact, the waiting trial inmates account for more than 75 per cent of the inmates in our prisons today.

“They are in our prisons with hardened criminals and by the time they come out they have been initiated into a life of crime and are ready to spread terror, death and destruction in their post-prison escapades.

“Lagos State has been at the vanguard in terms of criminal justice reform when it passed the ACJL in 2007, amended it in 2011.

“Other states followed suit, adopted and improved upon it. Now Lagos State is going further with these new practice directions to realise the goal of expedited trials, improvement in the case disposal rates and hopefully, this will culminate in the decongestion of our prisons”, she stated.