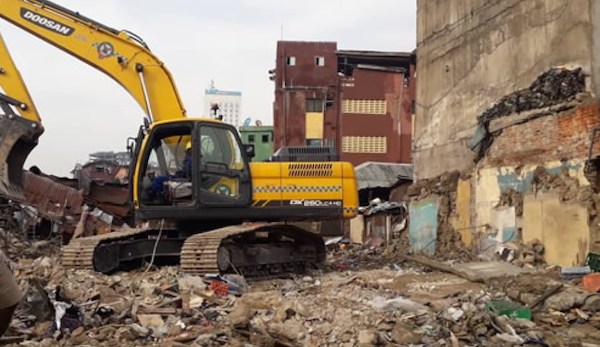 The Lagos State government on Wednesday marked two new buildings in the area where a one-storey building had collapsed for demolition.

The Lagos State Building Control Agency (LASBCA), which served a notice to the occupants of the building, also gave them two days to vacate the premises.

The building which was located in Ijaye Bus Stop along the Lagos-Abeokuta Expressway collapsed on Tuesday with many of the occupants trapped in the rubbles.

The building, mostly occupied by traders dealing in building materials, collapsed at 3:30 p.m., on Tuesday.

Although nobody died in the collapsed building, a pregnant woman was injured as she jumped to safety.

The woman is recuperating at the General Hospital, Ile Epo in Oke Odo Local Council Development Area of the state.

An official of LASBCA, who preferred anonymity, told journalists that the buildings had no development permit.

He added that uncompleted buildings in the premises would be demolished later in the day.

According to the official, other two buildings within the collapsed building would be demolished at the end of the expiration of the two-day notice.