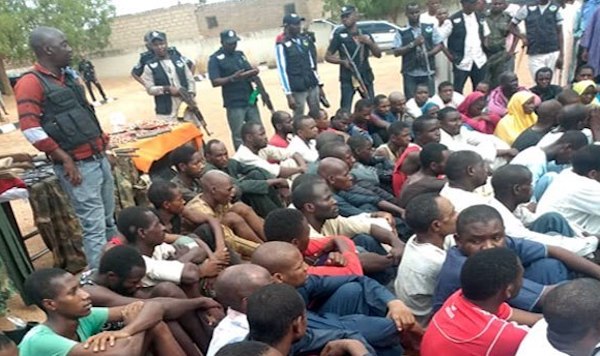 The Lagos State police command has arrested about 202 suspected cultists who were said to have terrorised the state in recent times.

Police Commissioner, Zubairu Muazu, on Monday paraded the suspects before newsmen, stating that an operation to flush cultists and gangsters from the district has been launched.

The operation codenamed CRUSH, is aimed at ending cultism and gangsterism. It would be directly under Muazu’s command and led by Area Commanders (ACs), Divisional Police Officers (DPOs).

This development is coming few days after two persons were killed and many injured during a clash between members of two rival cult groups, Eiye and Aiye confraternities, in Ikorodu area of Lagos.

Muazu on Monday advised cultists to renounce their membership of such groups or be routed, warning parents to ensure monitoring of activities of their wards.

READ ALSO: Police confirm woman who accused husband of being a kidnapper is suffering from mental illness

He said, “When cultism thrives, surely other heinous crimes like murder, rape, robbery, kidnapping etc will thrive too. Defeating cultism will therefore mean defeating all heinous crimes in the state, as virtually every major crime recorded in the State have a link to cultism.

“We have recovered 54 assorted weapons. Other successes recorded by the Command include the arrest of 105 suspects for armed robbery and 7 suspects for kidnapping.

“The command has also successfully foiled 93 armed robbery attempts through prompt response to distress calls from members of the public at different locations in the state.

“We must cleanse our communities of those few criminal elements who have threatened our social and economic well-being.

“Tackling cultism requires a holistic approach. We intend to adopt community policing approach. We will soon embark on sensitization programmes in collaboration with Police Community Relations Committee (PCRC) and other stakeholders in schools, neighborhoods and media.

“We will equally establish Police Students Relations Committee (PSRC), comprising all the Student Union Presidents and other students’ leaders. We will organise townhall meetings in areas mostly affected by cult activities.

“The meetings will discuss extensively, the root causes of cultism and gangsterism in the affected areas and the possible solutions.

“The various cult groups and gangs identified within the state include Aiye and Eiye confraternities, One Million Boys at Ajengule, Fadeyi Boys at Fadeyi, Akala boys at Mushin, Nokia Group at Surulere, Shitta Boys at Bariga, Oworonshoki, Shomolu and Palmgrove, Awawa boys at Dopemu, Agege, Ogba and Iyana Ipaja.

“We have observed the activities of these cult groups and gangs for the last one month and credible intelligence was gathered. We have reviewed our strategies and have initiated far reaching approach to totally eradicate this menace.

“We have rejigged our Anti-Cultism Unit to effectively combat those miscreants who have chosen the wrong path of life. We are taking the fight to their doorsteps; we are all out for them. We will fish them out, isolate them and bring them to justice. We are battle ready to uproot every cultists den and hideouts until they are totally defeated,” he said.

One of the paraded suspects Solomon Olowu confessed to be a member of the Aiye cult group, claiming he was oppressed into joining.

He said: “I joined the group in 2015 due to oppression and I feel sorry for myself at the moment. I was arrested on Monday during a raid around 8am at Ikorodu after a fight between Aiye and Eiye confraternity.

“My other colleagues were with weapons but I was not with any. The police team came after the clash has ended. I was the only one arrested, I feel very guilty and I promise never to do that again.”

Visually-impaired student, about 300 other young Nigerians get education scholarships