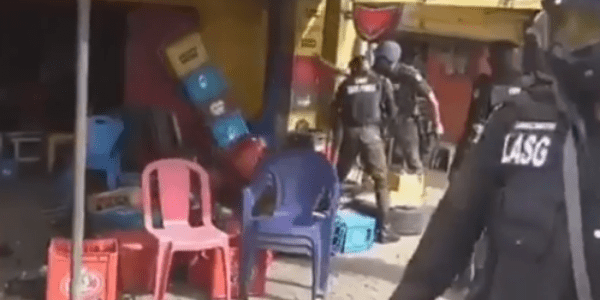 The officers, who were seen in a video that circulated on social media, destroying goods of traders that failed to obey the stay-at-home order by the Lagos State government over Covid-19 has been apprehended and subjected to internal disciplinary proceedings, the state police command said.

The police command, in a statement by its spokesman Bala Elkana, said the Commissioner of Police in the state, CP Hakeem Odumosu was not happy by the unprofessional conduct exhibited by some of the officers in the video and had ordered for an investigation into the matter.

Bala said the subjection of the errant officers to internal disciplinary proceedings known as Orderly Room trial, at the Provost Department, State Command Headquarters Ikeja would serve as a deterrent to others.

Adding that the conduct was totally condemned, Bala said police officers drafted to enforce restriction orders across the state had been cautioned to exercise their “discretionary powers with utmost professionalism, compassion and respect for the rights of the citizens.”