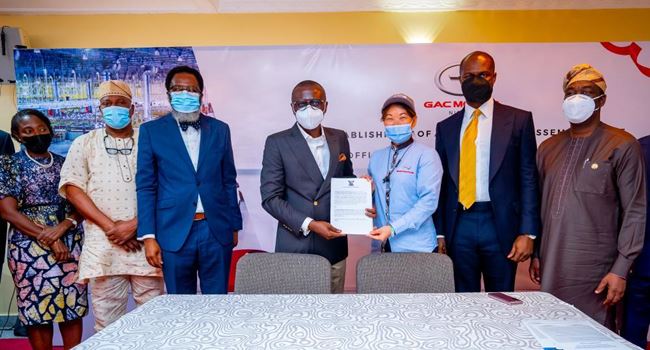 The Lagos State government has signed a joint venture deal with Chinese firm, CIG Motors, for a Vehicle Assembly Plant.

The deal will open a new channel of investment into the state and is also expected to revive industrialisation within the state.

According to Governor Babajide Sanwo-Olu, the Vehicle Assembly Plant will start producing vehicles within the next 12 to 18 months. The deal was signed by Sanwo-olu and Group Chairman of CIG Motors Ltd, Diana Chen and Vice Chairman, CIG Motors, Linus Idahosa, on Thursday.

Meanwhile, Lagos State government is a new entrant into commercial transportation business, as it plans to setup a transportation scheme, Lagos Ride. The Lagos Ride will compete with Uber’s luxury ride option, as it will also operate with only Sport Utility Vehicles (SUV).

In a statement released by Governor Babajide Sanwo-Olu, he described the transportation scheme as a socio-economic intervention from government.

Lagos Ride will provide 1,000 units of brand new SUVs that will transport passengers in the traffic-prone state.

Is Lagos Ride another Ekocab in waiting?

The Lagos Ride is expected to provide more transportation options for residents of the state, but this isn’t the first “innovative” idea from the state government. In the first quarter of 2020, Lagos-backed car-hailing startup, Ekocab, but the scheme has since not found its feet.

Ekocab had launched amid controversy following regulatory clampdown from the state government on other car-hailing firms like Uber and Bolt, as well as bike-hailing startups such as Gokada, ORide and Maxng.

Criticism from the public and potential customers led to the failure of Ekocab. It couldn’t compete with Uber and Bolt, as the market’s customer base through their weight behind Ekocab’s market rivals.
Ride-hailers saw the regulatory policies on ride-hailing firms as government attack on startups, in order to create a space for its business.

But Sanwo-Olu is confident in Lagos Ride, a scheme he described as innovative. “The Lagos Ride Scheme is another innovative policy of our administration targeted at making life easier for Lagosians, improving mobility and creating a seamless multi-modal transportation system.

“The scheme is in fulfilment of our desire to give residents better transportation choices. The modern ride service is one of the State Government’s socio-economic intervention programmes, which will be professionally managed in line with global best practices”, Sanwo-olu said.

What companies must do before adding bitcoin to balance sheet —Deloitte