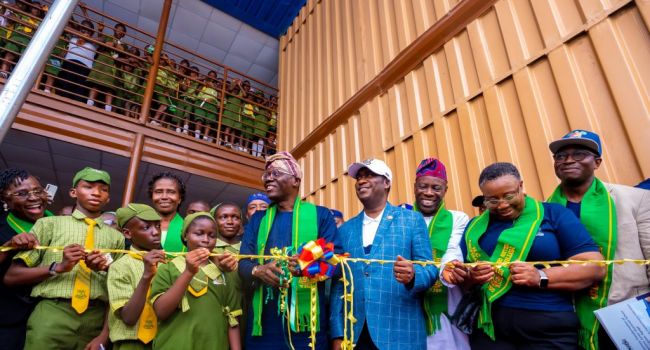 Sanwo-Olu, who spoke during the unveiling on Wednesday, stated that the nine-classroom block was constructed to replace deteriorating concrete structures in the government-owned model college Vetland Junior Grammar School.

Each classroom has enough insulation to provide comfort and a setting that is favorable for hybrid learning for students in public secondary schools.

The governor claimed that the state’s efforts to make basic education accessible would be significantly impacted by the IT-enabled modular interactive classrooms.

Sanwo-Olu stated that the students will receive electronic tablets in addition to the interactive touch-screens that would be installed in the classrooms to support both in-person and online study.

He said this would be taught in public elementary schools in Nigeria and throughout Africa in the future.

”The development of containerised modular classrooms is a welcome milestone on our journey toward ensuring that no child is left behind in Lagos.

”Our goal, as a government, is to build learning spaces of the future, thereby bequeathing public schools that are driven by cutting-edge technology and that can compete favourably with the best schools anywhere in the world,” he said.

Sanwo-Olu said that the upgrade of the model college was part of the strategic interventions initiated in the public school system, which had led to the rehabilitation and modernisation of over 200 public schools.

According to him, so far, the administration has constructed more than 800 new classroom blocks and supplied about 150,000 units of furniture to public schools across all six education districts of the state.

He said that the intervention had scaled up output in teaching and raised academic excellence.

”We have also improved security in our public schools by installing watch towers, perimeter fences, panic bells and flood lights, and have prioritised the comfort of boarding students through the provision of beddings and other necessary items.

”As the beneficiaries can attest to, the welfare and training of teaching and administrative staff in our public school have received significant attention as well,” Sanwo-Olu said.

Nairobi-based edutainment company, Kukua, secures $6m Series A. 2 other stories and a trivia.