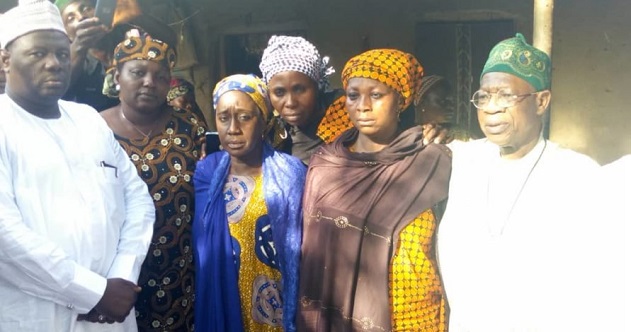 The visit, the first after 235 days of the abduction of the school girl alongside others, reports say was to assure the grieving mother that her daughter will soon be released.

Leah Sharibu was abducted alongside 109 other girls from the Government Girls’ Science and Technical College (GGSTC), Dapchi, Yobe State, in February this year.

109 girls were released in a Federal Government negotiated deal but Leah was kept by the abducting Boko Haram insurgents because of her refusal to pledge allegiance to Islam.

She is the only Christian among the abducted girls.

According to sources, the minister was accompanied by three other unnamed female officials.

It will be recalled that President Muhammadu Buhari had recently spoken to Leah’s mother on the phone.

A close source privy to the meeting said: “The Information Minister led the delegation made up of three other women with a message from the President, reassuring the family and the Christian Community in Dapchi that the lady will soon be released.”