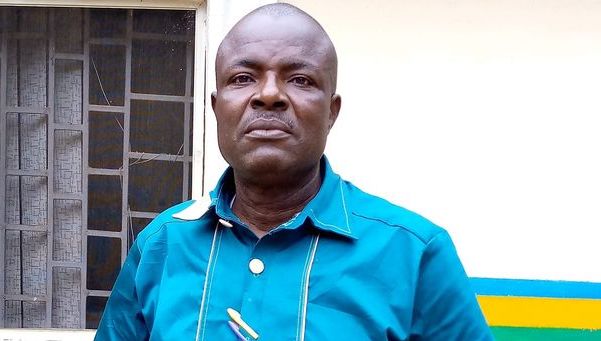 Lawyers acting on behalf of the people of Ovumnte community in Ivo local government area of Ebonyi State have declared their intention to commence legal proceedings against the Nigerian Police Service Commission for failing to sanction the Divisional Police Officer (DPO) in charge of Ivo Divisional Police Command, Daniel Nwornu, over his alleged involvement in land grab and human rights violations in the area.

In a pre-action notice, the people of the community will seek an order of mandamus from a Federal High Court, compelling the PSC to investigate the DPO for alleged misconduct.

The notice, according to members of the community, complies with Section 20 (3) of the Police Service Commission (Establishment) Act 2001.

In the notice, the people accused the police officer of aiding the former Senate President, Chief Pius Anyim and a Director in the National Health Insurance Scheme (NHIS), Mr. Chinedu Nicholas Makwe, to disobey court orders and carry out unlawful acts of land grabbing, malicious destruction of properties, forced eviction of land owners and other rights violations.

The resident of Ovumnte community said they had earlier filed complaints to PSC over alleged misconduct by the police officer, adding that the commission failed to act on the matter.

“Although the complaints were officially received by the PSC, the commission protected Nwornu Daniel C, and failed to investigate and sanction him in accordance with its duties under Section 6 (1) of the Police Service Commission (Establishment) Act.

“The development further made Nwornu Daniel C. to continue acting unprofessionally with great impunity and with deep bias towards members of the Ovumnte community,” they stated.

They also listed other instances of alleged misconduct by the DPO.

“In January, 2020, the said Nwornu Daniel who is resident in Chief Pius Anyim’s compound in Ishiagu, protected Chief Anyim’s bulldozers and agents, including Mr. Chinedu Nicholas Makwe, while they maliciously destroyed the vast farmlands and properties of the people of the community with the aim of forcefully evicting them from their ancestral lands in order for Chief Anyim and his cronies to acquire the said lands.

“The people of Ovumnte community subsequently filed law suits at the Ebonyi State High Court against Chief Anyim and his agents and the court ordered that status quo should be maintained by the parties.

“In March, 2020, Nwornu Daniel unlawfully arrested and detained several land owners in Ovumnte community and threatened them to vacate their lands for Chief Anyim and his agents.

“In June, 2020, the DPO and policemen under his command protected armed thugs and surveyors who entered Ovumnte land to evict land owners against the orders of the court which ruled that status quo should be maintained pending the determination of the matter. When the community reported the violation of the court order to the DPO, he told them that the FCT High Court in Abuja gave Chief Anyim the power to demolish their properties and evict them from their lands and build a city thereon,” the petitioners added. 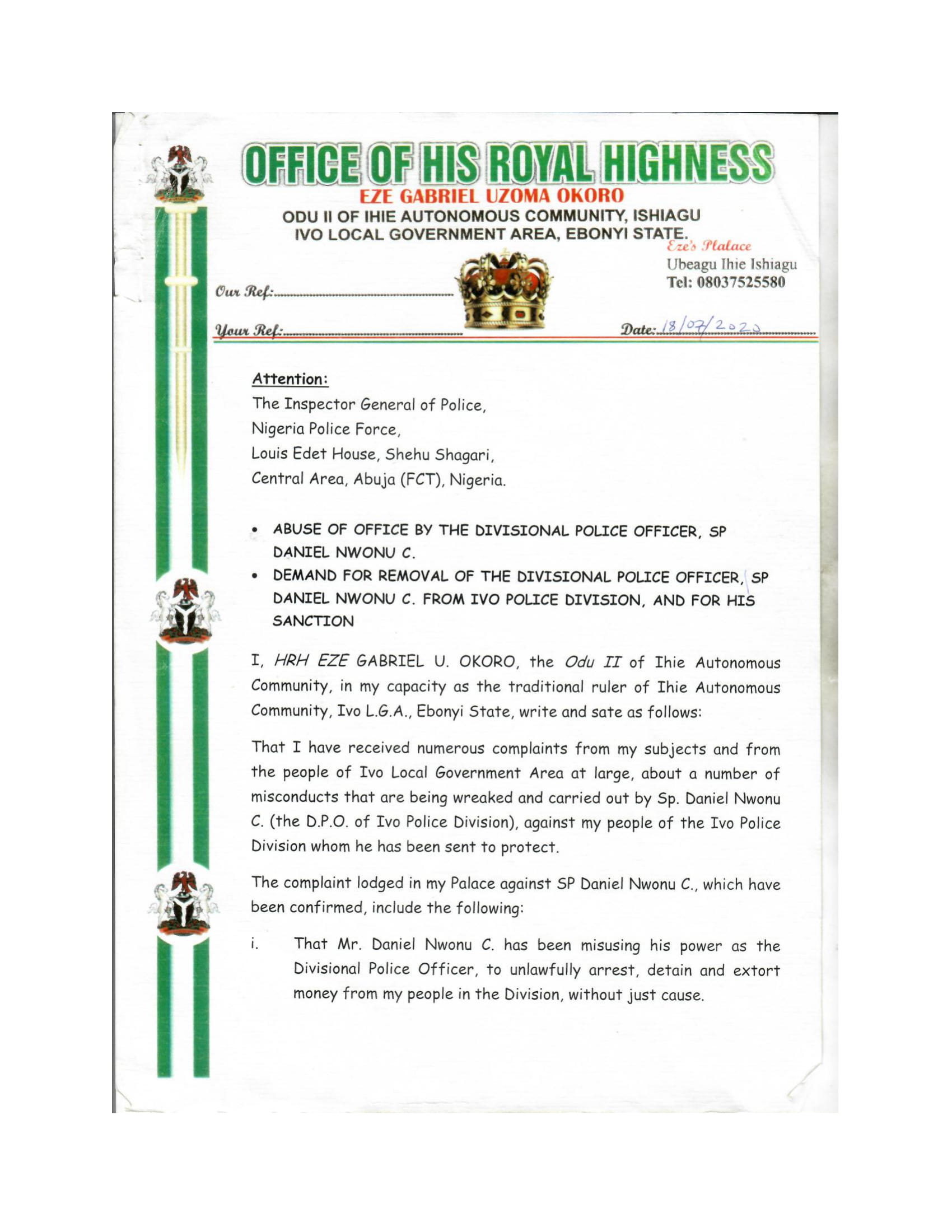 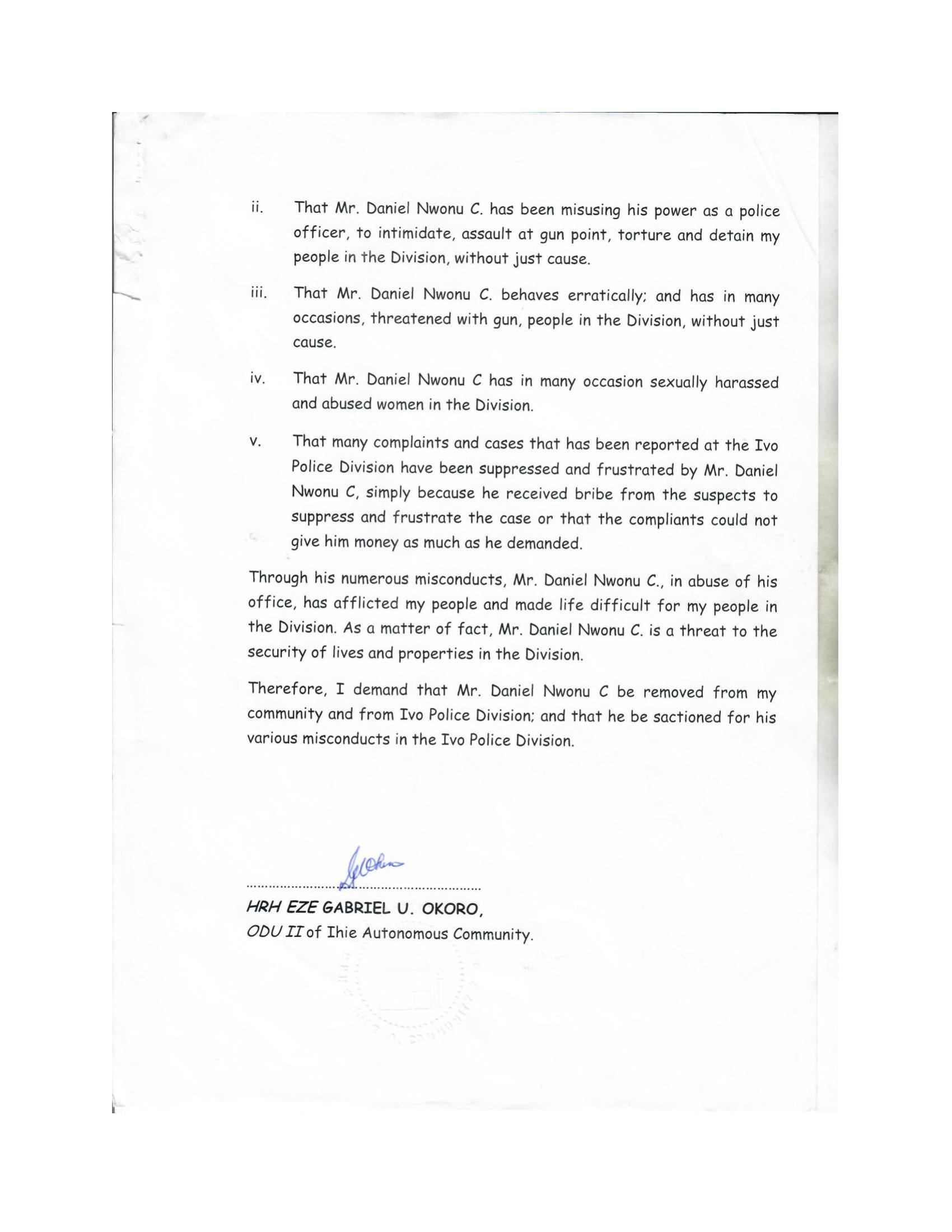 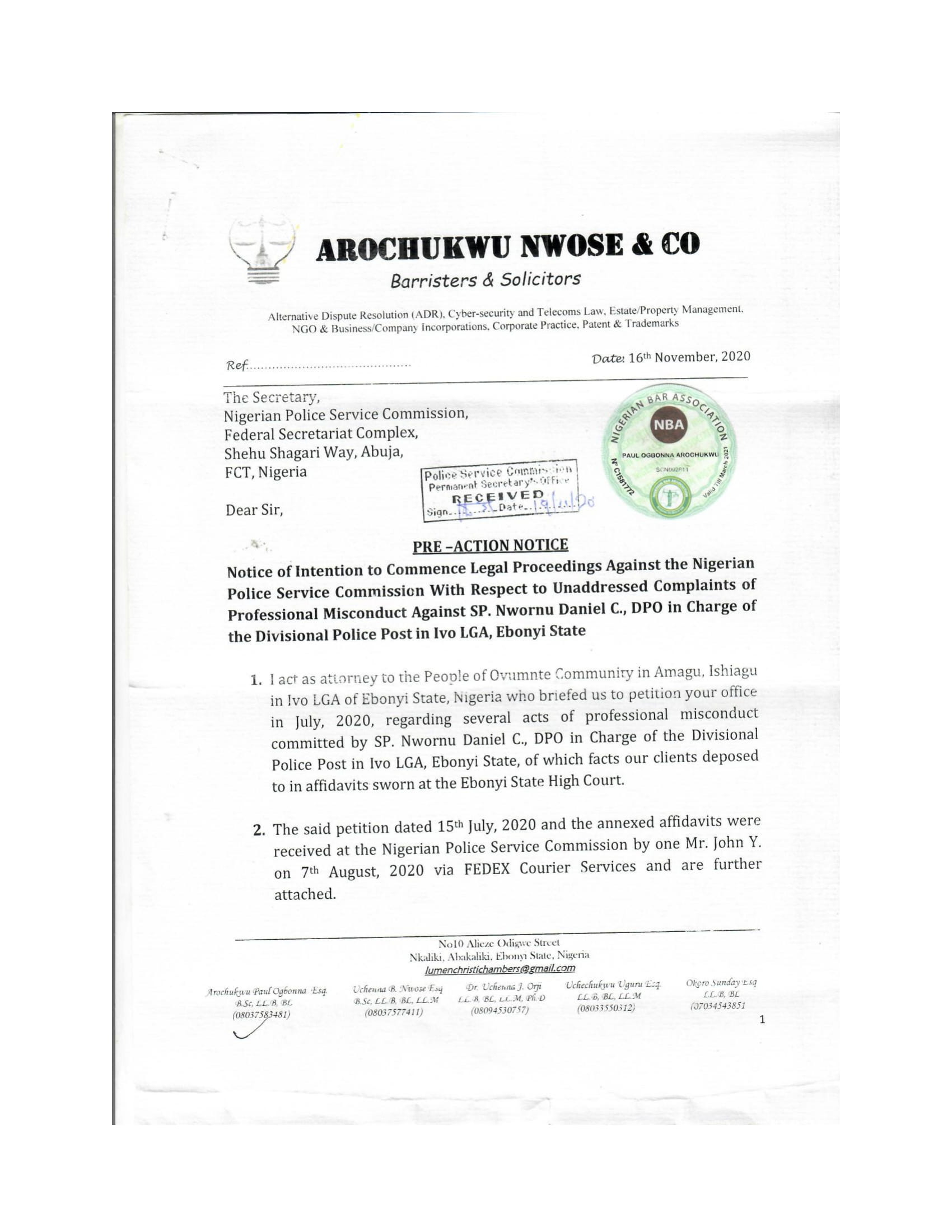 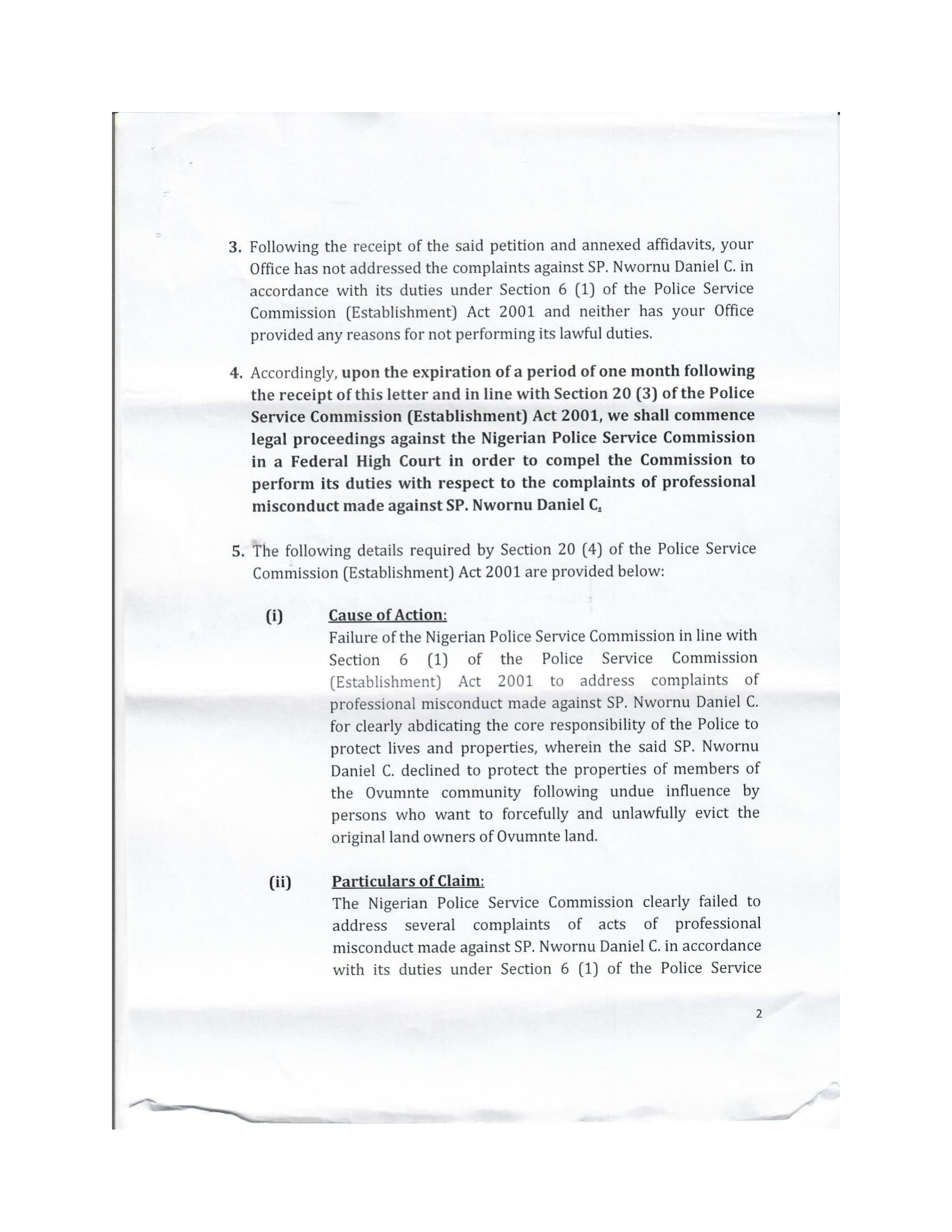 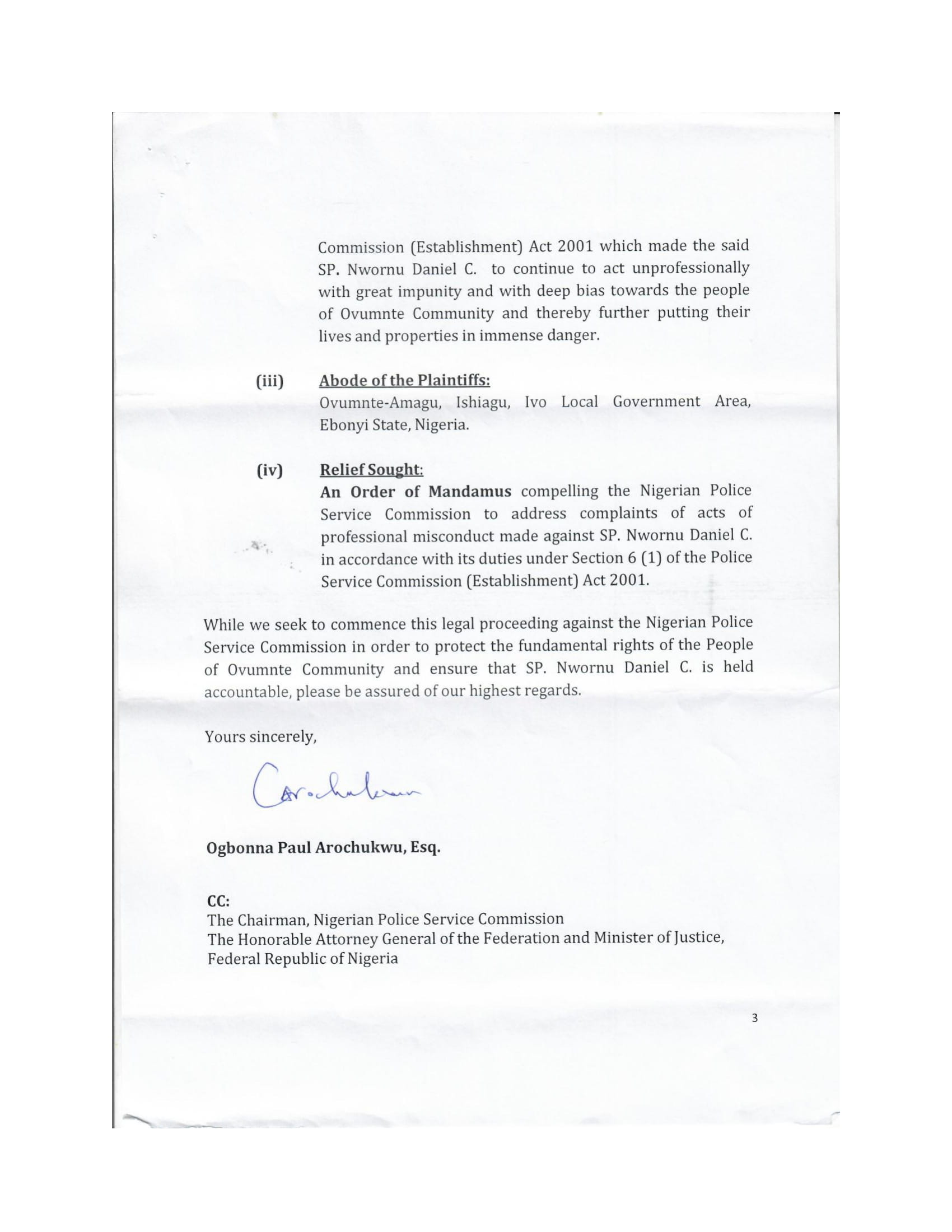