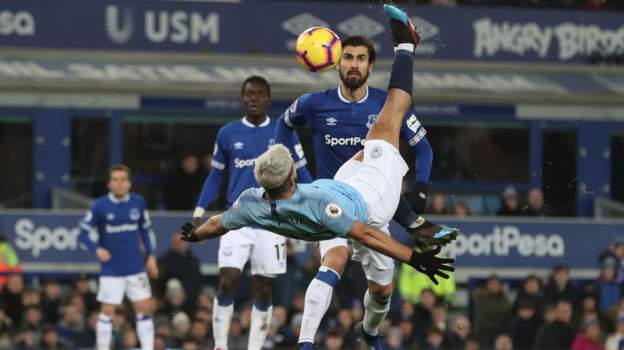 Champions Manchester City defeated Everton 2-0 to climb to the top of the Premier League table, with same points as Liverpool but a better goal difference.

The opening goal of the game played at Goodison Park on Wednesday was scored by Aymeric Laporte, who headed in David Silva’s free-kick at the stroke of halftime.

The visitors held on to the 1-0 lead until added time when Gabriel Jesus sealed the victory in the 97th minute.

It was Kevin de Bruyne who unlocked the Everton defence with a lovely through ball for Gabriel Jesus to chip Jordan Pickford, who made a smart save, but Jesus was able to wriggle and head in the rebound.

Speaking after the game, Jesus said: “For me it is amazing, not just the goal but because the team played very well. We came to win the game and to work hard, we know that when teams come here it’s so difficult.

“They have a lot of amazing players and an amazing manager.

“Everyone won the game. We know that it is going to be difficult. We want to play well in every game and at the end of the season we want the title.”

City will end a day top of the Premier League for the first time since December 15th 2018, when they were top after a win over Everton.