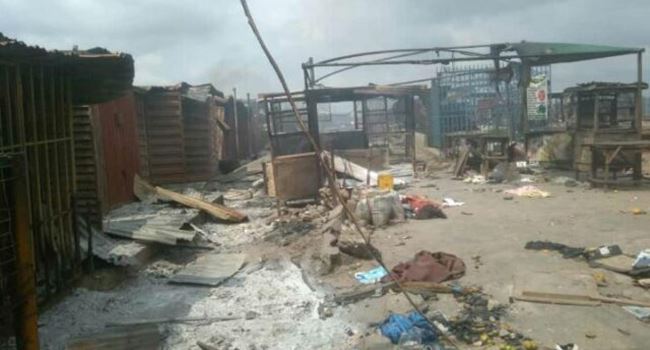 The Lagos State Government said on Tuesday that it will alleviate the pains of those who lost properties in the inter tribal clash in the Fagba, Ifako Ijaiye area of the state.

Governor Babajide Sanwo-Olu made the promise on Tuesday during an on the spot assessment tour of the area.

Sanwo-Olu, who bemoaned the level of destruction that trailed a clash between the Yoruba and the Hausa in the area, vowed to deal decisively with anyone involved in inter-tribal clashes.

The governor was accompanied on the tour by the Deputy Governor, Dr Obafemi Hamzat; Secretary to the State Government, Mrs Folasade Jaji; Special Adviser to the Governor on Education, Mr Tokunbo Wahab; and Head of Service, Mr Hakeem Muri-Okunola.

He said: “The level of destruction that I have seen here is colossal; it is unfortunate. Enumeration will start immediately by the two local governments. The council chairmen and all the community leaders will come together and come up with a list of those whose properties have been destroyed.

“We are using this opportunity to give notices to all the miscreants in the neighbourhood and that is why I am looking at you.

“If you know that you are not doing any work and that you are one of the people that have caused this trouble, we are giving you the final notice because we are coming to clear this whole place”.

Governor Sanwo-Olu, who promised that the government would compensate victims after getting a breakdown of the enumeration, however urged shop owners to be sincere while stating their losses.