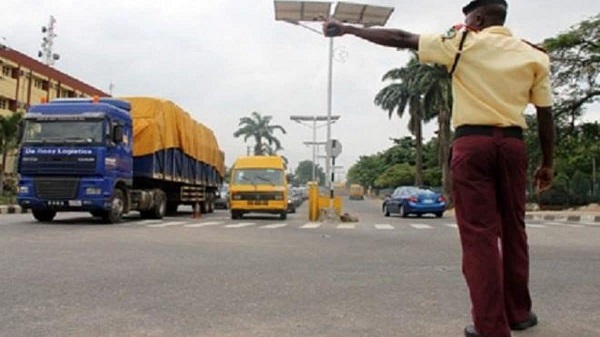 An official of the Lagos State Traffic Management Authority (LASTMA), Tope Akinde, on Saturday committed suicide in the Opebi area of Lagos.

Emotions ran high when the remains of the traffic official were seen dangling on the pole of a billboard around Salvation bus stop in the area.

At about 10:00 a.m., passersby milled around the corpse that was dangling on the pole around a mango tree and discussing in hushed tones the circumstances surrounding the young man’s tragic death.

Officials of the Lagos State Neighbourhood Safety Corps later visited the scene of the incident to restore normalcy by controlling the crowd to enable vehicles to access the road to their various destinations.

One of the people at the scene, who declined to mention his name, told journalists that said he saw people staring at a tree and thought there was a snake on it, but when he moved closer to the tree, he saw the man’s remains hanging on it.

He said, “I was going to Salvation bus stop and was on a bus when I saw a crowd of people looking at a mango tree before the bus stop. I thought there was a giant snake on the tree, so, when I alighted, I went to the scene and saw people taking pictures with their phone. At the scene, I saw the man dangling on the pole of a billboard with his tongue out. The pole was around the mango tree and it was around that part that the man used to hang himself.

“I saw a spec used by motorcyclists in his pocket. He wore a canvass, a jean and a black shirt. I heard one of the women that usually sweeps the road saying that the man was a LASTMA official and I also heard some other persons saying he was a commercial motorcyclist.”

The spokesman of the Lagos State police command Bala Elkana, said a female LASTMA official informed the command of the incident, adding that Akinde’s elder brother claimed that he had been suffering from mental instability for a while.

He said the corpse had been evacuated and deposited in a mortuary.

The command spokesman said: “On Saturday, February 1, 2020, at 10.57 a.m., a female LASTMA official, Yetunde Olajabu, came to the police station and reported that she received a phone call from an unknown person that one man hanged himself on a mango tree at Opebi and was later identified to be Tope Akinde, a staff of LASTMA.

“His corpse has been deposited at IDH Hospital, Yaba mortuary by the Lagos State Ambulance Service. Information at our disposal from the deceased’s elder brother revealed that the late Tope Akinde had a mental problem which the family had been managing before his death.”