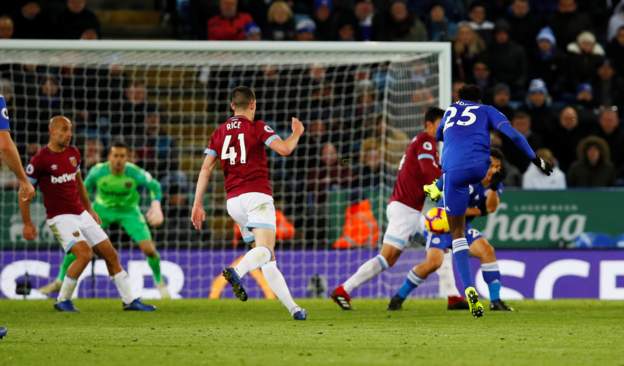 Super Eagles duo of Wilfred Ndidi and Kelechi Iheanacho were in action for Leicester City, and a late goal by the former secured them a draw against West Ham.

While Ndidi played throughout the Premier League clash staged at the King Power Stadium, Iheanacho was subbed off in the 62nd minute.

The hosts were trailing 0-1 against the Hammers, who scored on the half hour mark but were reduced to 10 men after Mark Noble was sent off in the 38th minute.

The visitors thought they were heading to victory when in the 90th minute, Ndidi fired a long-range shot that took a wild deflection off the West Ham goalscorer Fabian Balbuena and slammed into the back of the net.

Claude Puel’s side, whose Daniel Amartey left the pitch on a stretcher in some pain with an injury to his ankle in injury time, succeeded in rescuing a hard-fought point, thanks to Ndidi.

“It was really difficult in the first half but the second half was better. We just had to keep going,” Ndidi said after the game.

“I didn’t know if it [the goal] was going to come but it did eventually.”