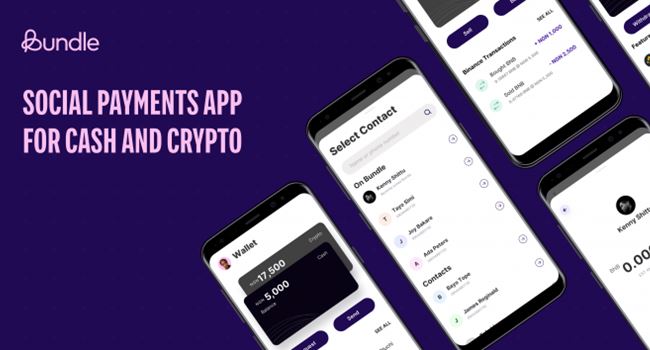 Nigerian social payments app for cash and cryptocurrencies, running business under the name Bundle, has launched operations in Ghana. According to press, the plan is to expand portfolio into several other African countries by the end of 2020. Launched in April, during the first wave of the coronavirus pandemic, Bundle allows users to request, send and receive cash or crypto from their peers where users are able to buy, sell and store digital currencies as well as deposit or withdraw digital currencies and local fiat currencies. Recall that after being founded by Yele Bademosi, Bundle was incubated within global blockchain company Binance, securing US$450,000 in funding from the firm in advance of its launch.

The new launch in Ghana means Ghanaians can download Bundle on Google Play and the App Store. While this is the first step of the startup’s plan to expand to several African countries before the end of 2020, this also gives more Africans the option to trade and store various cryptocurrencies. Speaking on the development, Bademosi revealed that the decision to open its organ in Ghana was as a result of the team’s belief that Ghana has potential in adopting crypto. He said: “We’re super-excited to finally bring Bundle to Ghana. I believe the country has immense potential for crypto adoption. Ghana is the right environment for Bundle to thrive.”

The Student Hub, a South African ed-tech startup, has joined Naspers Foundry portfolio companies, becoming the fourth startup to secure backing from the VC, and raising ZAR45 million (US$2.9 million) to help it expand. The startup, since its venture into business, increases access to vocational education to large numbers of students, whilst reducing the costs of delivery of education and training, by partnering with government accredited Technical and Vocational Education and Training colleges to help them deliver their courses online. Recall that, in 2018, Naspers launched Naspers Foundry, a ZAR1.4 billion (US$96 million) fund to help South African tech entrepreneurs grow their startups.

Till date, the VC has invested in SweepSouth, Aerobotics and Food Supply Network. Industry insights reveal that its investment in The Student Hub brings its total investment since launching Foundry to ZAR200 million (US$13 million), and Phuthi Mahanyele-Dabengwa, Naspers South Africa chief executive officer (CEO), said she believed tech companies have the potential to be the cornerstone of South Africa’s economic growth. She said: “We want to play a role in unlocking that potential. Our investment in The Student Hub is an example of how digitalisation has the potential to address unequal access to education, create local opportunities, and enable increased participation towards a more inclusive economy.”

QuickBus, a Kenyan mobility startup has announced intent to launch in more countries, gearing up plans to launch in Nigeria and Ghana. This development comes after witnessing impressive growth in the five markets it is already operating in. The one year old QuickBus aggregates long distance bus tickets in a marketplace, making it easier for users to compare prices and book journeys. According to reviews, the business model has helped bus companies run their businesses more efficiently. Meanwhile, having initially launched in Kenya, the startup is now also active in four other markets, namely Uganda, South Africa, Angola, and Zambia.

Speaking on the development, managing director Humphrey Wrey said the startup was growing fast. He said: “We processed more tickets in the last 24 hours than we did last month,” adding the startup would also hit US$1 million in gross merchandise volume (GMV). Experts speculate that this growth is set to continue, with QuickBus shortly expanding into West Africa. Till date, the startup has processed over US$750,000 worth of tickets to date, and takes a 10 per cent commission on tickets sold on its platform. Wrey stated: “The goal is to become the number one platform to plan and book intercity bus journeys, servicing the 800 million people who live and travel in sub-Saharan Africa.”