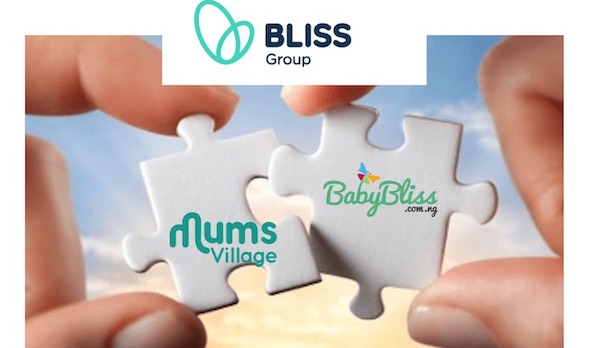 In a bid to form a pan-African platform, mothering and childcare focused e-commerce companies BabyBliss Nigeria and MumsVillage Kenya have, Monday, announced a merger deal. According to the startups, the development was born out of the desire to create a pan-African entity, providing what they say is an “unparalleled omnichannel commerce, community and content offering”.

According to reports on the merger, the startups will henceforth adopt a new calling: Bliss Group. Speaking on the development, actors have stated that the new pan-African brand would be co-headquartered in Kenya and Nigeria, adding that this marriage will see the firm offering commerce, community connection products and services to African pregnant women and mothers. Reacting to the development, group chief executive officer (CEO) Isis Nyong’o Madison said: “Bliss Group will leverage on our networks, learnings and reach to convert the financial opportunity that exists into reality by delivering not just greater shareholder value for our investors but looking to build a real powerhouse with women at the helm.”

Jack Dorsey’s website, Twitter, has reportedly flagged down a campaign-style video found recently in a retweet by the U.S. President Donald Trump. According to Twitter, the alleged video was disabled after copyright infringement complaint was filed by the right’s owner, Linkin Park. Reports revealed that the video contained music from the group Linkin Park. Flagging down the piece, Twitter added a notification identifying thus: “This media has been disabled in response to a report by the copyright owner.”

Speaking on the infringement as based on the Digital Millennium Copyright Act notice, Machine Shop Entertainment, a management company owned by the rock band Linkin Park, it submitted a request to remove the video on Lumen Database, a platform built for the collection of digital requests for removal of copyright breach materials. Commenting on the flag down, Twitter acknowledged that its platform takes action whenever there is a call from authorised owners. Twitter said: “We respond to valid copyright complaints sent to us by a copyright owner or their authorized representatives.”

Free music streaming platform Audiomack has announced its entry into the Nigerian shore, cementing the development by appointing 3 Nigerians to oversee its operations. Audiomack, in a press release, has confirmed Adeyemi Adetunji as the personnel incharge of operations and commercial partnerships, with Charlotte Bwana serving the business development and media partnerships desk while Olive Uche is expected to head the content strategy crew. According to the reports, this Nigeria entry makes it the 55th country to have Audiomack’s presence.

While debates are ongoing as to whether the new entry will disrupt the scene or displace existing Nigerian players like MusicTime and Boomplay, music consumers will play a major role in determining the fate of Audiomack in Nigeria. Audiomack was founded in 2012 by Dave Macli and David Ponte to allow artists to share mixtapes, songs, and albums. In January, 2019, it announced it had reached 1.5 million daily active users across its mobile apps and site.

Vodacom has entered into partnership with Chinese giant Ant Financial Services Group, formerly known as Alipay, to launch its super app ambition in South Africa. While Vodacom has shown great enthusiasm about this development, industry experts recalled that Vodacom pulled out of its initial MPesa idea only 4 years ago. Speaking on the difference in angle of the venture, Vodacom noted that the deal was the first time it had licensed the Alipay technology platform to a third party without taking an equity stake in the venture.

Meanwhile, Joosub has described Vodacom’s deal with Ant Financial as a “significant milestone for Vodacom Group, and in particular for Vodacom Financial Services”, a division that already contributed over R1-billion/year to the group’s profit. However, the Aliplay platform will only be available in South Africa, with other Vodacom markets continuing to offer M-Pesa. According to the company, the Aliplay “super app” will be available to all South Africans, though Vodacom customers will get rewarded with airtime and data and other incentives, while their access to the platform will be zero-rated for data usage.

The United Arab Emirates has initiated its ambition to land on Mars by launching its first ever Mars mission. According to reports, the UAE, on Sunday, July 19, launched a H-IIA rocket built by Mitsubishi Heavy Industries. The team of scientists noted that the rocket carried along the Al Amal (Hope) Probe for the UAE. As calculatedly timed, the Mars orbiter is expected to arrive at the red planet by February 2021. As a mission device, it is also expected to spend a Martian year (687 days) on orbit around Mars collecting data about its atmosphere.

Going by plans of the UAE, this is the first of the three separate planned missions to Mars that are scheduled to take place during July. Press reports from international media houses revealed that missions slated for July include a launch of a Mars orbiter, another from China set to take place later this week and NASA’s Mars Perserverance rover mission, scheduled for July 30. Hence, the Al Amar probe from the UAE has gone first, leading others in this space adventure. According to its team of scientists, the mission is expected to take measurements of Mars’ atmosphere, with intent of helping scientists understand how Mars went from being a warmer world with liquid surface water to becoming the incredibly cold, rocky and dry planet we know it as today.

Microsoft’s $26.2-billion acquisition of LinkedIn aimed to grow the professional networking site and integrate it with Microsoft’s enterprise software, such as Office 365.

The move allowed Microsoft to reach LinkedIn’s massive user base and put Microsoft’s sales and distribution heft behind what was already the world’s largest and most successful professional social network. LinkedIn retained its distinct brand and culture — and also its CEO, Jeff Weiner, who began reporting to Microsoft CEO Satya Nadella.