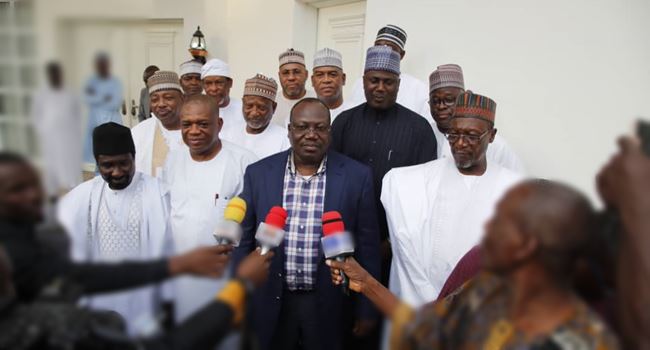 The President of the Senate, Ahmad Lawan on Friday, talked about areas of national interest, the upper Chamber would address before it went on Christmas break.

One area the National Assembly is looking forward, he said, is to receive the 2020 budget proposals.

“We are hopeful and optimistic, as well as hungry and thirsty, to receive the 2020 appropriations bill,” Lawan told reporters shortly on his arrival from a private visit abroad.

Lawan seized the advantage of the National Assembly current recess to travel on a private visit to Morocco and Germany.

“I am aware that the executive arm of government is working assiduously to ensure that the appropriation bill for the year 2020 is presented to the National Assembly by the end of this month.

“The National Assembly will work so hard to ensure that the 2020 budget is passed before we go on Christmas break,” Lawan said.

The Senate President said budget is one issue that the National Assembly will take head-on to ensure that the undesirable trend of the budget is reversed.

“We believe this can be achieved, as doing so would make the economy better and predictable.

“We also think an early passage of the 2020 appropriations bill will have a desirable impact on Nigerians,” Lawan said.

Lawan also disclosed that the executive has forwarded to the Senate the Medium Term Expenditure Framework (MTEF) which will be considered when the Senate is back from its recess next week.

“We hope to take on the MTEF within the first legislative week. Our committee on Finance will be saddled with its first major responsibility that it works expeditiously on the Fiscal Strategy Paper/Medium Term Expenditure Framework’s request of the executive arm of government and thereafter the budget will come after that.”

The Senate President said the ninth National Assembly would work assiduously with the executive arm of government to improve the security situation of the country.

The Senate, he added, will also evaluate the crisis that affected Nigerians living in South Africa.

“In the eighth Senate, we had an Ad-Hoc Committee that I was privileged to chair, to review the security architecture of the country. We are going to look into that report, and in addition, other contemporary issues that affect security in the country.

“We are also going to look into the crisis that affected Nigerians living in South Africa.

“You recall that this issue was reviewed before we went on recess. The Senate felt as an institution that our citizens’ diplomacy must be protected where ever they go in the world.

“The government must be there for them, and I’m happy that after the xenophobic crisis, the Federal Government was able to take a position.

“We need to be much more resolute, whatever the situation is; our citizens must be protected. If someone runs afoul of the laws of a country, there are processes and procedures on how such a person can be prosecuted.

“Therefore, we must try to protect our citizens. I also think we must be proactive to tell our citizens that if they choose to live in any country, they must ensure to stay within the limit of the laws of that country, just as we expect of foreigners in ours,” Lawan stated.