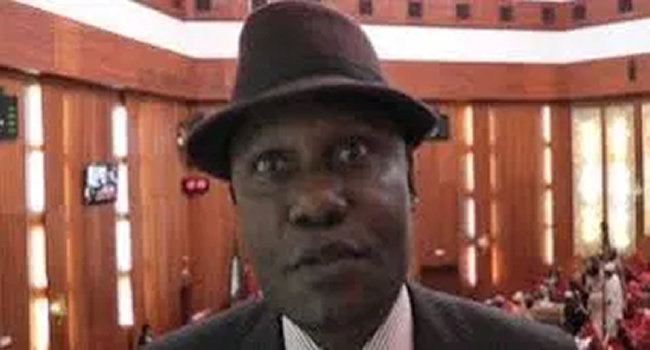 Bandits unleashing havoc across the country have become more emboldened,going by the narrative of a lawmaker from Edo State, Senator Clifford Ordia.

Odia who spoke at plenary on Wednesday recounted his ordeal during an encounter with the criminals.

Ordia, a PDP lawmaker, heads the Senate Committee on Local and Foreign Debts.

During his narrative, he stated that the suspected bandits on Monday attacked his convoy twice under 24 hours at different locations on the Okene-Lokoja and Lokoja-Abaji axis.

This was during a return trip to Abuja from his country home in Edo State, Ordia stated.

He said during the exchange of fire between the criminals and security officers attached to him, three policemen sustained wounds from gunshots.

The lawmaker also said one of the wounded policemen was in a critical condition, but responding to treatment in one of the hospitals in Abuja.

Though lucky to have escaped unhurt, Ordia said his vehicle was riddled with bullets.

“I’m seriously traumatised by the horrible experience,” he said.

“We were coming from Edo state, somewhere between Okene and Lokoja, when we met these suspected bandits, they opened fire on my convoy. The gallant policemen had to immediately return fire.

“The other security vehicle behind had to immediately join them and they were able to repel the suspected bandits. During the exchange, three of the policemen sustained gunshot wounds. One of them was critically injured. We had to immediately rush them to a Federal Medical Centre in Lokoja, Kogi State.

“They did their best and were able to stabilise them. I had to immediately put a call across to the Federal Medical Centre in Abuja to be on standby. One of the policemen had a bullet lodged close to his liver.

“We met another setback around Abaji. There was traffic because of the incident and because we had to save the lives of the wounded policemen, we decided to make a move. They opened fire on us. Some vigilantes had to join the policemen and they were chased into the bush.

“That was how I survived that attack. If you see all my vehicles, you’ll see how the bullets damaged them. But I’m glad that we all survived. I must salute the gallantry of our policemen. If given the right equipment, they can do a lot and protect Nigerians.”

Ordia beseeched the Federal Government to rejig the security architecture in order to arrest the deteriorating security situation across the country.

Related Topics:BanditsConvoygunmenLawmakerOkene-LokojaSen Clifford Odia
Up Next