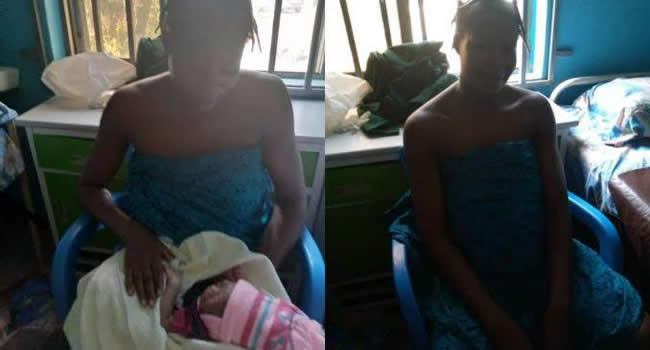 An eighteen-year-old girl, Kemisola Oguniyi, arrested by soldiers in Akure, Ondo State, during the #EndSARS protests in October 2020, has given birth in prison.

Following the development, some lawyers are demanding her immediate and unconditional release.

Ripples Nigeria gathered that Ms. Oguniyi, who was pregnant before she was arrested on October 22, 2020, went into labour on Tuesday, June 15, and gave birth to a baby boy on Wednesday.

Her mother, Felicia Ogunniyi, had appealed to the state government and human rights advocates to help her facilitate the release of her daughter and the newborn from the correctional facility.

Ms. Oguniyi was said to have been randomly picked up along with others by personnel of the Nigeria Army on the streets of Akure, for allegedly having connections with #EndSARS protesters who razed the All Progressive Congress (APC) secretariat in Akure.

Kemisola and three other persons, Ayodele Bukunmi, Ojo Samuel, and Ani Obinna, were arrested, paraded, and arraigned by the Police before an Akure High Court for conspiracy to commit arson, riotous assembly, stealing, and malicious damage.

However, the accused all pleaded not guilty and were subsequently remanded in correctional centres in Akure.

But her lawyer, Tope Tomekun, who spoke with newsmen on Thursday insisted that she was innocent.

He maintained that Kemisola was arrested while she was on her way to the Federal University of Technology Akure (FUTA) to get money to buy drugs for her sick mother.

Also, Kemisola’s father, Rotimi Ogunbiyi, said the arrest and illegal detention of her daughter had thrown the family into sorrow.

He argued that his daughter would not have been arrested if not for her sick mother who needed drugs.

Meanwhile, Tomekun in separate letters sent to the Chief Judge of Ondo State, Oluwatoyin Akeredolu, and the state’s attorney general, Charles Titiloye, called for the detainee’s release and the termination of the charges filed against her.

In his letter to the Chief Judge dated June 17, 2021, the lawyer urged the Chief Judge to facilitate the release of the detainee, especially due to her “sinless newborn child.”

“I write to you sir, first as a lawyer and in furtherance of my conviction as a believer in the humanitarian cause of justice, to appeal to you sir, that for the sake of the sinless newborn child and in the interest of justice, to give a directive that this matter is given an urgent hearing as this is one deserving case, sir, in which the powers in this direction could be exercised,” the letter read.

In his letter to the state’s Attorney-General and Commissioner for Justice, the lawyer called for the entering of “nolle prosequi” (withdrawal of the charges) in the case filed against Ms. Oguniyi.

“No single link between Kemisola and the allegation from the proof of evidence filed by the office of the Attorney-General which is now in my possession in furtherance of my brief from the parents.

“I reasonably hold, with a very strong conviction, that the legal advice from the office of the DPP (Director of Public Prosecutions) ought to have exonerated Kemisola.

“That the office of the Attorney-General still went ahead to file charges against her which made her remained behind bars till she gave birth still baffles me.

“We use this medium to seek audience with the Honourable Attorney-General on this matter,” he added.

JUST IN… One student abducted from FGGC Kebbi dead, four others, teacher released