Home » Top Stories » After ‘lazy’ comment, Buhari has another word for Nigerian youths 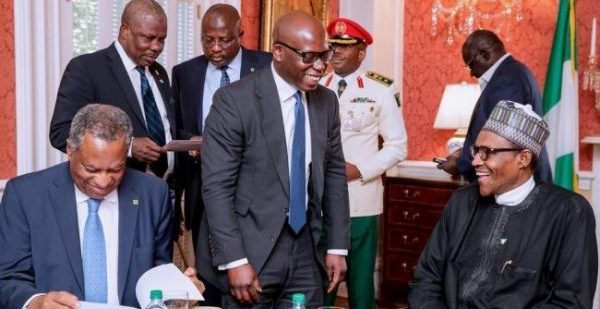 President Muhammadu Buhari has again spoken directly to Nigerians youths, whom he says make up about 60 per cent of the country’s population.

The president told them to take to farming in order to earn respect for themselves, whether they have attended school or not.

Speaking on Monday at a meeting with the Chief Executive Officers of six American agricultural companies and their Nigerian counterparts, Buhari s quoted to have said, “Our youths, the ones who have gone to school and even those that have not, should go to the farm, to earn respect for themselves”.

Senior Special Assistant to the President
(Media & Publicity) Garba Shehu in a statement, said Buhari stated this while calling on youths in Nigeria to seize opportunities in agriculture, a sector of the economy he said is already proving to be the bedrock of the nation’s new economy.

This is coming a few weeks after the president had stirred serious controversy, and national discuss over his comments about Nigeria youths.

Buhari, on the sidelines of the recently concluded CommonWealth Heads of Governments Meeting (CHOGM) held in London had commented that a lot of Nigerian youths do not want to attend school, or work, because they feel Nigeria is an oil producing country.

Although the president’s media aides battled to curtail the raging storm created by the comment, many Nigerians, especially youths, berated the president for insinuating that Nigerian youths are a lazy bunch.

The issue trended, and continues to be a topic of discussion on social media with #lazynigerianyouths.

Speaking on Monday at Blair House, Washington DC after his White House engagements with President Donald Trump, the President, at the meeting again lamented the challenges of the country’s youth bulge, with “sixty per cent of the population below 30 years.”

He said the country must help the young people to plan their future and urged them to explore opportunities easily accessible in agriculture because, as he said, “agriculture is the future.”

While stressing that planning in Nigeria must take into consideration the factors of climate and a bulging youth population, President Buhari also promised the support of his administration in the promotion of skill development, innovation and entrepreneurship among the young population.

According to him, “We realized, rather belatedly that we ought to have been investing in agriculture. We are now aiming at food security because of our large population. Our youths, the ones who have gone to school and even those that have not, should go to the farm, to earn respect for themselves. Agriculture is providing jobs for millions of our citizens and we are doing well towards the attainment of food security and jobs”.

According to him, “the media may not appreciate the work we are doing but we will shock them by the success we are recording.”