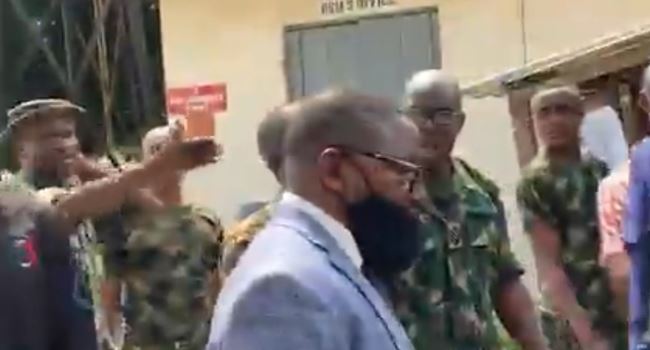 Soldiers manning the Military Hospital, Ikoyi, on Friday chased out members of the Lagos State #EndSARS Judicial Panel of Enquiry and members of the press who visited the facility to inspect its mortuary.

The panel was set up by the state government to investigate the shootings that took place in which soldiers were alleged to have used live bullets against peaceful protesters.

The panel, which Hd earlier visited the Lekki Toll Gate plaza showed up at the military facility unannounced.

In a video online, soldiers were seen ordering the delegation to move outside the premises behind the gate to avoid being embarrassed, even as a senior military personnel followed them (Panel delegation) to attend to them outside the gate.

Ebun Adegboruwa, a member of the panel, told the senior officer, that the panel came to the hospital because it had intelligence that might help with its investigation.

“The facility is relevant to our investigation. We have a pathologist. We are here on the authority of the president, not only the governor,” he said.

“We are following dues process, and it is important we visit the mortuary as it will help our findings.

“If we are not allowed access, we will go back and take other actions. We won’t force ourselves in. We have confidential information that the military hospital here is relevant in the investigation of the Lekki event. We heard this hospital is controlled by 65 battalion, and under the 81 division. We are also taking steps to reach military authorities”, Adegboruwa told the official.

Adegboruwa said though the panel does not have evidence that there are bodies of those killed at the tollgate in the hospital, it was at the facility to verify the claim that they were.

The military officer however told member of the panel to produce a written authorization, to enable him pass same to his superiors, but the panel members could not.