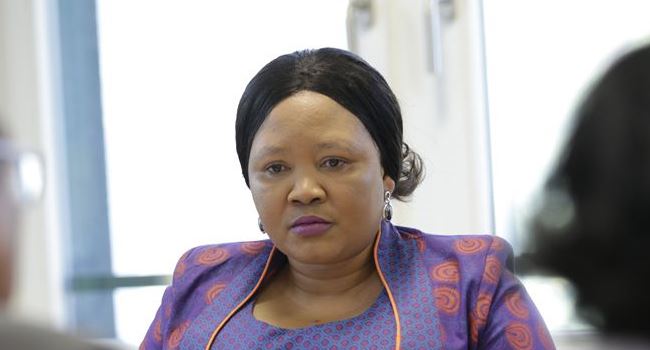 The bail granted in February to Maesaiah Thabane, the wife of Thomas Thabane who resigned as prime minister last week, has been revoked by Lesotho’s Court of Appeal on Friday.

“As soon as we get the written judgement… we will arrest her,” deputy police commissioner Paseka Mokete said after the court ruling yesterday.

Maesaiah has been charged with ordering the murder of Mr Thabane’s previous wife, Lipolelo Thabane, in 2017.

At the time Lipolelo was going through a bitter divorce with Mr Thabane.

Thomas and his new wife have denied any involvement in her killing.

Last week Wednesday, Finance minister, Moeketsi Majoro was sworn in as Lesotho’s Prime Minister after his predecessor, Thabane resigned to deal with a scandal involving the murder of former his wife.

The oath taking ceremony took place at the king’s palace in the presence of dignitaries but the new prime minister did not give a speech.

Thomas, 80, succumbed to pressure to resign on Tuesday after he and his current wife were declared suspects in the murder of his former wife, Lipolelo Thabane three years ago.

Lipolelo Thabane, who was said to have refused Thabane a divorce was gruesomely murdered on June 2017, two days before her husband’s inauguration, as the police found her shot dead in her car.

Related Topics:LesothoMaesaiah Thabane
Up Next

I’m one of those who formed APC, drafted its constitution, Ize-Iyamu replies critics