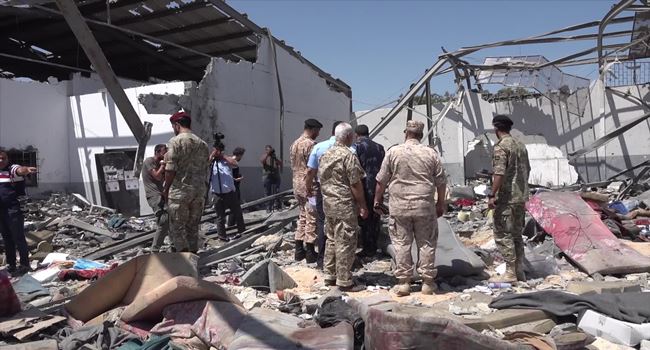 Airstrikes suspected to have been carried out by rebel forces loyal to Gen Khalifa Haftar, on a military school in the Libyan capital, Tripoli has left no fewer than 28 people dead and many others injured.

Footage from the scene of the deadly attack showed bodies scattered across the ground with local authorities revealing that the details and the motive of the airstrikes was still unclear.

“An air raid on the military school of Tripoli killed 28 cadets and injured dozens more,” said Amin al-Hashemi, a spokesman for the health ministry of the Government of National Accord (GNA).

Libya has been torn by violence and division since long-time ruler Muammar Gaddafi was deposed and killed in 2011 with Libya’s UN-backed government now fighting an insurgency led by Gen Haftar.

Recall that in April last year, Gen Haftar launched an attack on Tripoli in an attempt to oust the internationally recognised government.