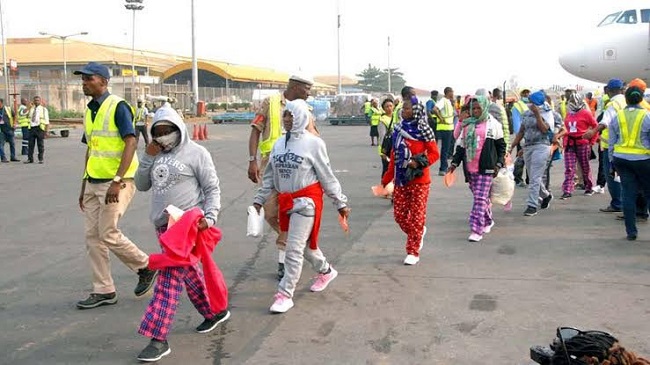 Efforts at combating illegal migration may not be in vein as 164 Nigerians voluntarily returned from Libya on Friday.

Upon their return in the early hours of the day, some of the returnees identified two suspected human traffickers who take unsuspecting Nigerians to Libya with the promise of taking them to Europe.

Farinloye said NEMA received 160 Nigerians from Libya According to him, the two men were among the new batch of 164 returnees who arrived the Cargo Wing of the Murtala Muhammed International Airport, Lagos about 12.15 a.m. on Friday.

READ ALSO: News of me endorsing Atiku is fake, Moghalu

He said the Nigerians were brought by the International Organisation for Migration (IOM) and the European Union (EU) under the Assisted Voluntary Returnees Programme that would end in April 2020.

“Among them were three returnees with medical cases and a pregnant woman who was in labour upon arrival in Nigeria.”

Returnees have therefore been advised to remain focused on starting a positive life with the abundant resources available within Nigeria instead of seeking the elusive greener pastures outside the country.

While it is the right of every Nigeria to seek for better livelihood outside the country, they must however, ensure to follow processes that would not endanger their lives.

Caught in the act! Woman dumps lover’s body inside bush