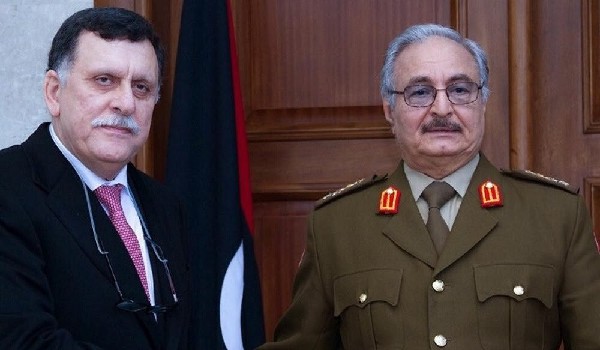 The head of the National Accord (GNA), Fayez al-Sarraj and the commander of the eastern-based Libyan National Army (LNA), al-Mabrouk al-Gazawi (both warring factions) have arrived in Russia for a meeting over ceasefire talks.

Reports say the meeting between the two Libya factional leaders is aimed at agreeing on an unconditional and open-ended ceasefire in Libya.

However, Fayez al-Sarraj, on Monday signed a draft ceasefire agreement, while Khalifa Haftar requested more time to consider it.

“They have a positive view of the document and asked for extra time until the next morning to decide,” Russian Foreign Minister Sergey Lavrov said of Hafter and his delegation. “I hope they will make a positive decision. Russian and Turkish representatives will continue to offer their assistance.”

READ ALSO: Protests in Tehran after Iran admits to shooting down Ukrainian airliner

The LNA and GNA, two warring factions in the ongoing Libyan civil war had both accused each other of breaking an internationally brokered ceasefire within hours of it taking effect.

After pressure from their backers, Russia and Turkey, the ceasefire officially started on Sunday but it was broken within hours.

Reacting to the break in the ceasefire, the LNA commander al-Mabrouk al-Gazawi said GNA “militias have breached the truce in several areas with all kinds of weapons”.

However, The GNA said it had “documented breaches by Haftar’s militias on the battlefronts of Salah al-Din and Wadi al-Rabie” around Tripoli.

The LNA initially rejected the calls for a ceasefire before announcing late on Saturday that it accepted a truce in GNA-controlled western Libya “provided that the other party abides by the ceasefire”.