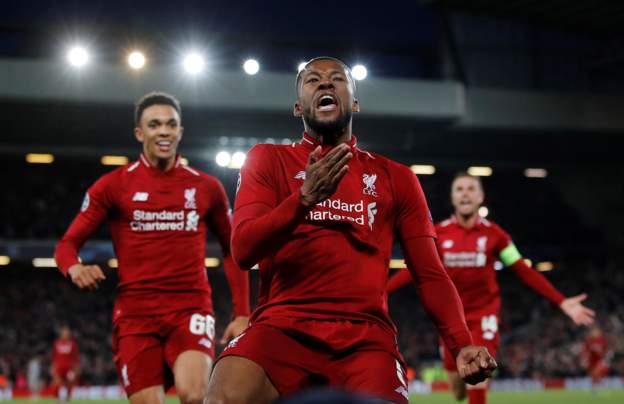 Liverpool completed an incredible comeback victory against Barcelona in the semifinal of the Champions League with a 4-0 win at Anfield on Tuesday night.

Trailing 3-0 from the first leg at Camp Nou, the Reds put up one of their best performances of all times to beat the Spanish champions at home.

They reach the final of the Champions League the second time in a row, and will face either Tottenham or Ajax in Madrid on June 1st.

Liverpool are into their ninth European Cup final, and it is the first time since 1986 – when Barcelona knocked out Gothenburg in the old European Cup – that a team have recovered a three-goal first-leg deficit to win a semi-final in this competition.

Divock Origi put the Reds ahead in the 7th minute when he tapped home from close range.

Substitute Georginio Wijnaldum, who replaced injured Andy Robertson, doubled the lead in the 54th minute and scored again in the space of 122 seconds to tie the game at 3-3.

Origi then struck again with the winner 11 minutes from time after Trent Alexander-Arnold caught the visitors’ defence napping from a corner.

Speaking after the game, coach Jurgen Klopp said: “The whole game was too much. It was overwhelming. We played against maybe the best team in world. Winning is difficult but winning with a clean sheet, I don’t know they did it. It’s unbelievable.

The second semifinal return leg holds on Wednesday at the Netherlands between Ajax and Tottenham. The hosts lead 1-0 from the first leg.