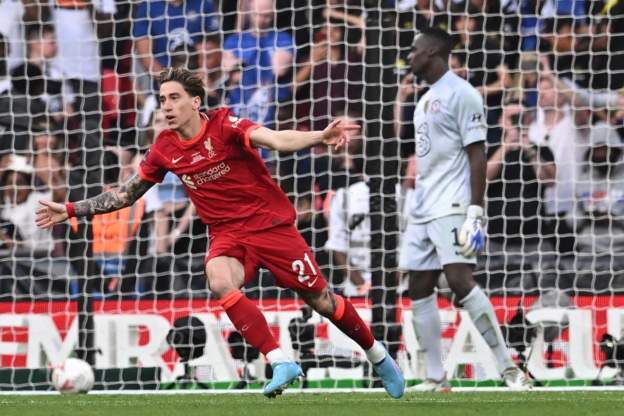 Liverpool have beaten Chelsea on penalties to emerge champions of the English FA Cup, winning the title for the first time in 16 years.

It was Alisson Becker who made a crucial save before Kostas Tsimikas netted the winner to help Liverpool win 6-5 on penalty shootout.

The game had ended goalless after 120 minutes of thrilling back-and-forth that saw Liverpool star Mohamed Salah subbed off in the 32nd minute with injury.

The Reds, who had already won the Carabao Cup earlier this season, keep their quadruple hopes alive as they are still in the race for the Champions League and the Premier League.

Liverpool have now won the FA Cup a total of eight times, with the last victory coming 16 years ago, while Chelsea could not go one better than last season, where Leicester City narrowly beat them in the final.

The Jurgen Klopp side are second in the Premier League with two games left, and are three points behind leaders Manchester City who play against West Ham in London on Sunday.

The Reds are also in the final of the Champions League where they will face Spanish champions Real Madrid, with the hope of sealing a revenge for their defeat in the 2018 final.

Meanwhile, Chelsea will be hoping to seal a top-four spot in the Premier League to secure Champions League ticket next season.

EPL: Spurs move above Arsenal into fourth with win against Burnley

Lewandowski says he will not sign new Bayern contract