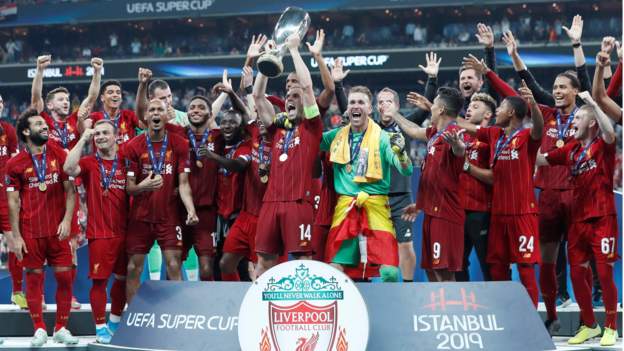 Liverpool and Chelsea played a thrilling game at the UEFA Super Cup in Istanbul on Wednesday, with the game decided on penalties after a 2-2 draw after extra time.

Liverpool defeated their Premier League rivals in the contest, winning 5-4 on penalties, with Tammy Abraham losing the last kick for Chelsea.

The defeat for Chelsea means manager Frank Lampard has now lost his last three Super Cups as a player and manager at the London club.

Olivier Giroud opened the scoring to put the Blues ahead in the first half before Sadio Mane, assisted by Roberto Firmino, equalised minutes into the second half.

At 90 minutes, the scoreline remained 1-1 and the game went into extra time.

Mane scored again to put the Reds ahead, but a penalty by Jorginho brought Chelsea back into the game.

During the penalty shootouts, all players on both sides converted, except Abraham, whose shot was stopped by goalkeeper Adrian’s foot.