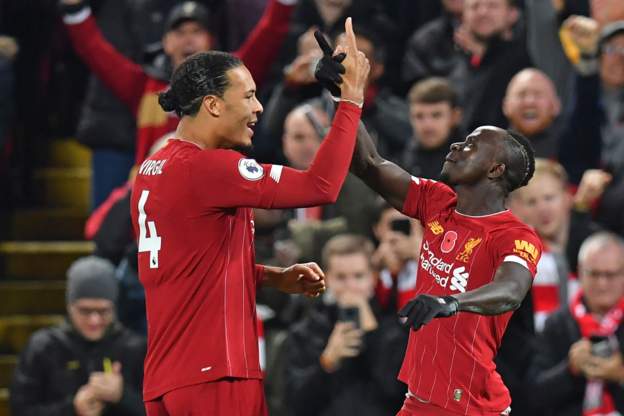 Premier League champions, Manchester City were beaten 3-1 by Liverpool in a top of the table clash at Anfield on Sunday.

Goals by Fabinho, Mohamed Salah and Sadio Mane put the hosts on a commanding lead before Bernardo Silva scored a consolation for City.

Raheem Sterling missed a headed chance and Sergio Agüero saw a shot deflected on to the post as City tried to find their usual rythm.

The Reds are now nine points clear of Pep Guardiola’s side, seizing control of the title race with eight points ahead of second-placed Leicester City.

“Congratulations to Liverpool, they scored three, we got one but I’m so proud of my team, few teams can come here and play the way that we did,” Guardiola said after the game.

“It’s not easy after being two goals down to react the way we reacted. It was one of the best performances I have ever seen from my team. That’s what we needed and hopefully we can continue to make the steps we need.”

Liverpool travel to Crystal Palace next on November 23, while City are at home to Chelsea on same day.