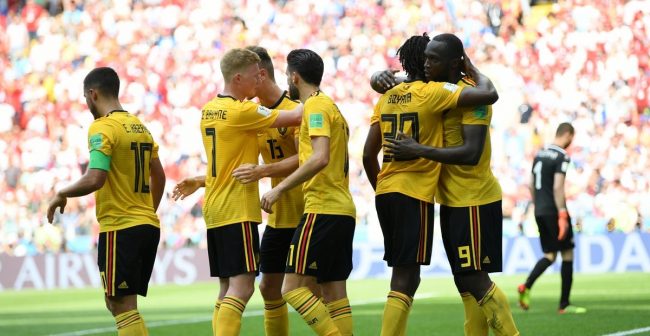 A brace each by Romelu Lukaku and Eden Hazard ensured Belgium stole the show against Tunisia in a 2018 FIFA World Cup Group G encounter in Moscow on Saturday.

With a devastating attacking display, Belgium got ahead in the 6th minute when Hazard converted a penalty awarded after he was brought down inside the box.

Lukaku doubled the Red Devils’ lead on 16 minutes before Tunisia pulled one back when Dylan Bronn got on the end of Wahbi Khazri’s whipped free-kick less than 2 minutes after.

Read Also: After year of chemotherapy, Ikeme in ‘complete remission’

The Manchester United forward restored the two-goal lead just before half time – his goal number 4 in the tournament – which keeps him side-by-side with Cristiano Ronaldo on the scoring chart. Then Hazard made it 4-1 just 6 minutes into the second half.

Both players were later taken off, as Substitute Michy Batshuayi added the 5th goal for Belgium before Khazri swept home Hamdi Nagguez’s cross in injury time to end the game on 5-2.

The Eagles, who had already been beaten by England in their first match, are on the verge of crashing out of the 2018 World Cup.

As it stands, a win for England over debutants Panama in Nizhny Novgorod on Sunday will see them and Belgium progress to the next round.