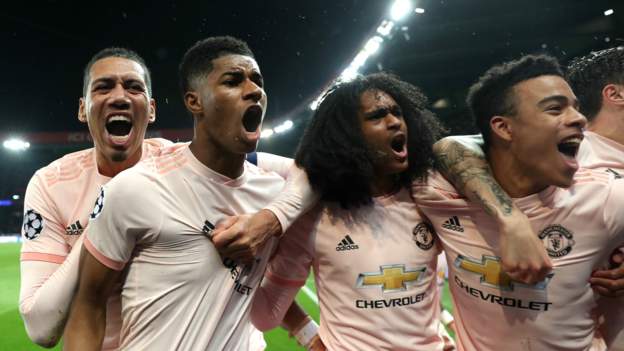 Trailing 2-0 from the first leg at Old Trafford, United put up a good show in Paris to win 3-1 which was enough to see them through.

Lukaku opened the scoring less than 2 minutes into the game but the hosts levelled up in the 12th minute when Kylian Mbappe gave a pass to an unmarked Juan Bernat who poked in.

Lukaku put United ahead again on the half hour mark when he fired in a loose ball as Gianluigi Buffon spilled a shot from Marcus Rashford.

The hosts thought they would hold on to the aggregate lead, but a late handball by Presnel Kimpembe which was reviewed by the Video Assistant Referee (VAR) gave the game up.

Rashford stepped up to the spot and won the tie for United.

“Me and Marcus Rashford knew we could do the business today after playing together against Fulham. It was a pleasure to play with him today like that,” Lukaku said after the game.

“We agreed to step up the press together and I told him every time he shoots I would follow the ball in.

“We just keep going – everything starts on the training ground with 5 v 5, 6 v 6 and the competitiveness starts there. It’s natural to us, we keep going until the referee blows the whistle.”

United have several players injured and also a Paul Pogba who was suspended after picking a red card in the first leg at Old Trafford.

But Rashford said, despite the odds, his side took advantage of the opportunity.

“Everything seemed to be against us but we’re used to surviving these moments and we proved that again. We keep pushing and bettering ourselves.

“It’s a beautiful thing, to have 10 players injured too, but its an opportunity and it’s what they deserve.”

In the other Champions League round of 16 game played concurrently, Portugal’s Porto defeated AS Roma 3-1 after extra time to go through.

They had lost 2-1 away at Rome, but bounced back to seal qualification for the last eight.