Falana, who made the denial in a pre-action letter signed by his lawyer, Adeyinka Olumide-Fusika (SAN), also demanded a retraction of the claim by a newspaper which published a story suggesting that Magu had paid the sum of N28m to him from the money allegedly siphoned from the EFCC.

The human rights lawyer threatened to institute a legal action against the newspaper should it fail to apologise to him and publish a retraction of the story on its front page within 48 hours.

Olumide-Fusika stated in the letter that he received Falana’s “immediate instruction” to demand that “you (the newspaper’s editor) acknowledge your wrongdoing, expressly admit that what you imputed against my client was false, and apologise for your unprofessionalism and the damage you have caused to him.

“I do hope that you will, within the next 48 hours, comply with this gentlemanly request by publication on the front page of your newspaper. Failing compliance, my instruction is to issue a Writ in the tort of defamation in order to afford you an opportunity to prove what you imputed against my client’s character,” the letter added.

Olumide-Fusika further contended in his pre-action letter that the newspaper, by its publication “meant and intended to mean and convey” to its readership that Magu allegedly used a bureau de change operator to pass the sum of N28m to Falana in an alleged money laundering scheme.

He described the publication as “damning against my client because his entire career as a lawyer has been devoted to fighting human rights abuses and corruption in high and low places”. 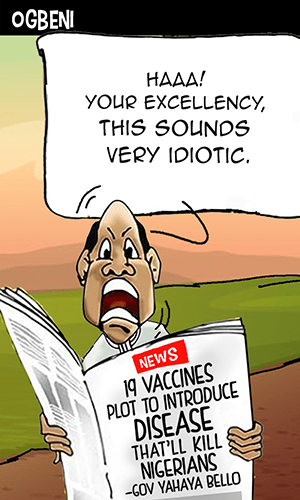