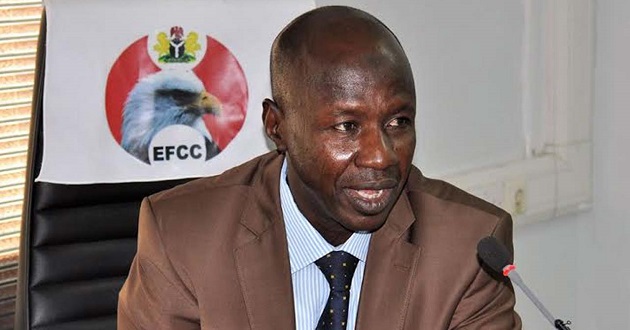 The suspended acting Chairman of the Economic and Financial Crimes Commission (EFCC), Ibrahim Magu has asked the Justice Ayo Salami-led Presidential Panel to investigate the alleged sale of recovered assets by the office of the Attorney General of the Federation and Minister of Justice.

According to Magu, the AGF, Abubakar Malami (SAN), had no constitutional authority to approve the auction of recovered assets which he said was the responsibility of the Minister of Finance.

It would be recalled that the AGF had reportedly granted two separate approvals to an auctioneer to conduct an open bid for sale of crude oil and diesel as well as five vessels forfeited by illegal bunkering operators to the government.

But Magu, who spoke through his lawyer, Tosin Ojaomo on Saturday, contended that the justice minister had no power under section 174 of the 1999 Constitution to dabble into assets management, adding that the law only empowers him to institute and undertake criminal proceedings.

Magu’s lawyer also attributed his client’s travails to detractors who he said were not comfortable with the fact that he (Magu) was remitting money directly to the Federal Government coffers.

“On what grounds is the AGF appointing contractors to conduct open bid? You can see that there is a question mark on the company appointed to conduct the auction. There is one Omoh-Jay Nigeria. There is a moral burden. The same person was tried by the EFCC, the same firm was now being picked to sell the assets recovered by the EFCC.”