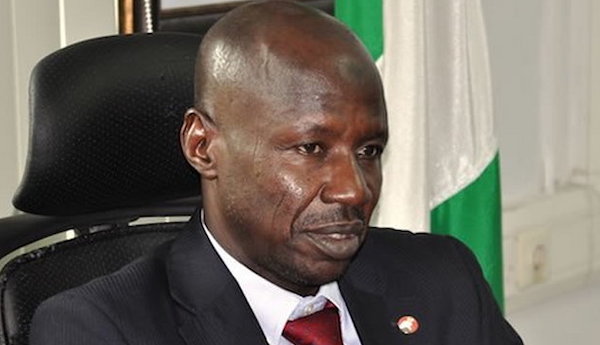 The suspended acting Chairman of the Economic and Financial Crimes Commission (EFCC), Ibrahim Magu, said on Sunday he would start responding to every single allegation levelled against him by “detractors.”

Magu, who spoke through his lawyer, Wahab Shittu, said the allegations were prejudicial to the proceedings of the panel.

The embattled anti-graft czar was questioned early this month by a presidential panel headed by a former president of the Court of Appeal, Justice Ayo Salami, for alleged graft.

He was detained for 10 days for allegedly re-looting assets recovered by the EFCC from suspected treasury looters and several other allegations.

Shittu said: “Take notice that our client can no longer fold his hands in the face of these sustained malicious attacks to prejudge him in the public space.

“Our client will, henceforth, point by point, reply to all false allegations orchestrated against him in the public space on a daily basis, as well as present his comprehensive defense for the world to see.

“This is without prejudice to the willingness of our client to defend himself in the ongoing proceedings at the presidential investigation panel.

“The truth of the matter is that well over N329 billion recovered by EFCC under our client’s watch was remitted directly into NNPC dedicated accounts under a special arrangement endorsed by NNPC, EFCC and the affected NNPC’s indebted marketers.

“By virtue of the said special arrangement, NNPC had requested formally that the EFCC recover the said amount from the affected NNPC’s marketers who were expected to pay such funds directly to NNPC while NNPC, in turn, confirmed receipt of such payments to EFCC.

“Therefore, EFCC never took custody of any of the recovered funds and so, the question of misappropriation of such funds by EFCC or our client could not have arisen as falsely published.”